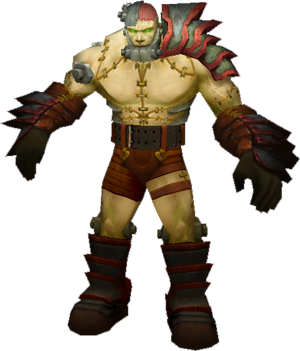 Flesh titans are the most powerful constructs of the Scourge. Built from the corpses of storm giants and the flesh of women and children stitched together. It is said that their souls are fused together — eternally bound within that foul prison of flesh.[1] What little knowledge there is points to the flesh titans as being far more intelligent than other constructs and possessing deadly electrical powers.

Flesh titans seen to be inspired by Frankenstein's monster, another being stitched together out of spare parts and (at least in movie incarnations) revived with the power of lightning.

The name "flesh titan" is taken from the game files as no other name is known. It is likely the file name is in reference to the fact that the model uses the same skeleton and animations as the model used for the titans (or simply to reflect its size).

Retrieved from "https://wowwiki.fandom.com/wiki/Flesh_titan?oldid=2711573"
Community content is available under CC-BY-SA unless otherwise noted.