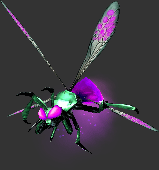 Fireflies are glowing, winged insect creatures found in Zangarmarsh. Adventurers hunt them for their beautiful Diaphanous Wings. A huge firefly is used by some as a light source.

They can be found in at least two new places (Loch Modan and Northrend) since The Shattering patch was released, and probably others as well.

The model used in WoW for fireflies looks like and is called a wasp not a firefly, even if the tail glows.

The Marsh Hornets and Nix are currently the lowest level wasps in the game, at only level 16 for the Hornets and level 17 (Rare) for Nix.

Retrieved from "https://wowwiki.fandom.com/wiki/Firefly?oldid=2791910"
Community content is available under CC-BY-SA unless otherwise noted.