Female armor tends to cover less than does male armor. While this is clearly not for defense, it makes the boys come to the yard. Many players with male avatars have complained that they aren't getting fair treatment, but some enterprising and imaginative artists have proposed changes to level the playing field.

This section concerns content that is silly (or possibly very silly).

This is how Warcraft male characters, leaders and NPCs might look in female armor: 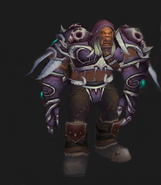 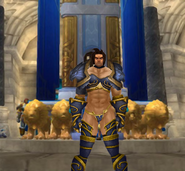 Illidan and Kael'thas in Sylvanas/Alxstrasza/ysera armor

Arthas in plate bikini
Add a image to this gallery

Not so silly section