Burning Legion, Some might be allied with Fel Horde

The felblood are an offshoot of the blood elf race that — like fel orcs before them — have been corrupted by the Burning Legion.

The Felblood elves are a group of Kael'thas Sunstrider's most loyal followers, who were rewarded by Kil'jaeden with the gift of being allowed to gorge themselves on demonic blood for days for remaining in Outland, even as many of his blood elves retreated through the Dark Portal.

Felblood Initiates remain behind at the Throne of Kil'jaeden in the Hellfire Peninsula where they feast on siphoned fel energy from Suspended Terrorguards, though many are counted amongst Kael's invading forces on the Isle of Quel'Danas. There, a felblood named Selin Fireheart can be found in the Magisters' Terrace, while a force known as the Shadowsword resides in the Sunwell Plateau — appearing to be responsible for the capturing of M'uru from the secret chamber beneath the Blood Knight headquarters.

Felblood elves are corrupted Blood elves that joined forces with Illidan Stormrage when their Sunwell was corrupted by Arthas Menethil's use of it to reincarnate Kel'Thuzad. When the other blood elves joined Kael'thas Sunstrider to an expedition and recruited themselves as Alliance, Lor'themar Theron took over Quel'Thalas in his absence. The expedition fought the Scourge that was surrounding their main operations. They would've died, but before that happened, Lady Vashj and her serpentine Naga joined Kael'thas to kill the Undead. When Garithos found out, he and the New Alliance found this as nasty treachery. They banished the blood elves and locked them into ruined Dalaran cells. Lady Vashj helped them to get out and spoke to them before they left Lordamere Lake. Lady Vashj told Kael that there is no cure for their thirst for magic. But there are ways to feed it, like demons perhaps, but first Kael thought of it as madness, but in the end, he joined Vashj to find Illidan. When Kael joined Illidan, they undertook various missions, like the operation to kill the Lich king in Northrend. But Kael'Thas wanted more and joined the order of the Burning Legion and was trained by Kil'Jaeden. Once they fed upon fel magic, they stopped their worshipping the sun and started worshipping Demons. 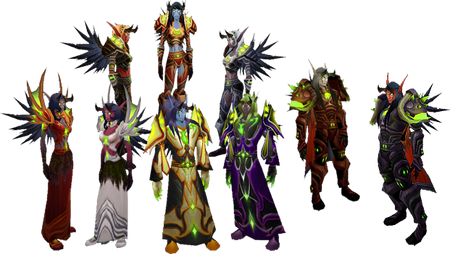 In addition to bearing runic tattoos, they have developed various demonic features, such as unnatural skin and hair colors, horns, and what appear to be small, black-feathered wings — as well as cracks and openings in their skin, which reveal green fel energy glowing from within.

Retrieved from "https://wowwiki.fandom.com/wiki/Felblood_elf?oldid=2861405"
Community content is available under CC-BY-SA unless otherwise noted.