Grandmaster of the Shadow Council on Azeroth

Shadow Lord Fel'dan is a level 57 orc found in Shadow Hold in Felwood.

Fel’dan, the current leader of the Shadow Council on Azeroth, plans with the dreadlord Banehollow within Shadow Hold, which was once the largest of the barrow dens. This ancient orc obviously has lost none of his strength to age, and his bloodied robes and gruesome blade make him an intimidating sight. With the death of Gul’dan, Fel’dan has taken charge of the remainder of the Shadow Council, and reestablished its powerful ties to the Burning Legion. He works extensively with Lord Banehollow to further the Shadow Council’s interests, most notably spreading the corruption of Felwood into other areas. Fel’dan seeks to corrupt the druidic home of Moonglade, but thus far, his efforts have been thwarted by the Emerald Circle and Remulos, the mighty son of Cenarius. In combat, Fel’dan prefers to allow his two succubi companions, Moora and Salia, to lead the way into melee while he destroys his enemies with spells from a distance. If his succubi are not present, he attempts to summon help to fill their roles. He is not hesitant to cut down his foes in melee, and retreats only if truly necessary. He prefers to use directly damaging spells over curses, unless he expects the battle to last a long time.

Fel’dan has learned how to reanimate the deceased druids of Jaedenar into intelligent undead druids who retain many of their abilities. These undead druids have such an intimate knowledge of nature that they are able to spread the corruption of Felwood much further and faster than normal. Fel'dan carries the greatsword, Hellfire.[1] (LoM 15, 16)

It is believed that Fel'dan is "perhaps a descendant or apprentice of Gul’dan".[2] (HPG 184) 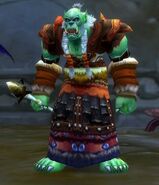 Fel'dan in WoW
Add a image to this gallery

Retrieved from "https://wowwiki.fandom.com/wiki/Fel%27dan?oldid=2581855"
Community content is available under CC-BY-SA unless otherwise noted.