Farms are where food is grown to feed the various races of the worlds of Azeroth and Draenor.

Producing needed sustenance, these sites are a vital part of any community. Farms produce grains and foodstuffs to feed not only the populace and peasants, but the armies as well. You must have enough food to supply all of your units, so keep a close eye on how much you can expect to harvest. Farms are self sufficient in that they supply their own workers, but if they are destroyed, your available food supply will be affected.[1] (W1ManH 27)

Farms produce the grains and animals needed to keep the encampment and the army well fed. You must produce enough food to supply all of the Orcs you control. Once your peons have constructed the site, the farm will prosper with no further concern on your part. If you have a farm destroyed in battle, your ability to produce enough food will be affected.[2] (W1ManO 27)

Farms are a vital part of the many communities in Lordaeron. Producing various grains and foodstuffs, Farms not only generate sustenance for peasants and workers, but for the armies as well. The overall amount of food produced from a town's Farms is vital to the number of new workers or soldiers that the community can accommodate. It is imperative that this production be monitored at all times, so that the population remains well fed and the town runs smoothly.[3] (W2BnetMan 51)

Vital to any human Village, the Farm provides sustenance for troops and citizens. The uncanny ability of these skilled farmers to harvest almost any landscape under the harshest conditions is highly regarded in the lands of Lordaeron. The number of troops sustainable at any village is dependent upon the amount of land harvested by the small farms.[4] (W3Man 12)

Farms are found in many places throughout World of Warcraft.

The Human Farm of Warcraft III forms the basic design of the human house, but true human farms can be found in Westfall, Arathi Highlands, Hillsbrad Foothills, and many other places. Farms players might see in their adventures include the Arathi Basin Farm and Saldean's Farm.

Dwarves also have a farm in the Wetlands and a farm in the Arathi Highlands (though both are coincidently out of the way). Amberstill Ranch could be considered a dwarven farm, although it is called a ranch.

Tauren may also farm or herd animals as implied by 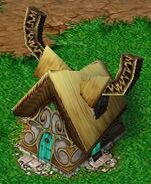 Wetlands farm
Add a image to this gallery

Retrieved from "https://wowwiki.fandom.com/wiki/Farm_(building)?oldid=2736576"
Community content is available under CC-BY-SA unless otherwise noted.