Molok
(fellow windrider, like a brother) Rhonin, Vereesa
(during Day of the Dragon)

Falstad Wildhammer, also known as Falstad Dragonreaver, is the High Thane of the Wildhammer Clan. He ruled the Wildhammer clan from Aerie Peak in the Hinterlands following the departure of Kurdran Wildhammer and joined his companions Rhonin and Vereesa in freeing the Dragon Queen Alexstrasza from Grim Batol. Since the Cataclysm, he serves as a member of the Council of Three Hammers in Ironforge (although adventurers may encounter him at his ancestral home at Aerie Peak in the Hinterlands).

The Wildhammer Dwarves are stuck in conflict against local Troll tribes. They wish to maintain their independence, something that their people have valued since the War of the Three Hammers, but the increasing number of Trolls in their land causes growing concern. Falstad also sees the Scourge just beyond the horizon, and knows that one day, his people will have to make a stand against the undead as well. To this end, he seeks to increase the Wildhammers’ ties with the Alliance without actually joining, which puts him in an interesting position. Since he has not officially joined the Alliance, he lacks their full support; but the Horde does not yet consider him an enemy either. He has yet to decide if joining the Alliance would be beneficial enough to risk the wrath of the Horde, but his people lean more in that direction, especially with many of them working side-by-side with the Stormpike clan and the few remaining high elves.

Falstad does have one thing in his favor: the red dragonflight. As a member of the party that freed the Dragonqueen, and a personal friend of her mate Korialstrasz, he is one of the most respected humanoids in the eyes of the red dragons. While he has yet to call upon their favor, Falstad considers flying to Grim Batol to ask for aid, or just to discuss matters with the dragons. If Falstad could be persuaded to join the Alliance, perhaps he could bring the red dragonflight with him.

Due to his fighting prowess against dragons, Falstad is often known as “Falstad Dragonreaver,” but his real last name is (like Muradin Bronzebeard) that of his clan: Wildhammer.[1] (APG 168)

Falstad Dragonreaver was a noble gryphon rider of the Wildhammer dwarf clan of Hinterlands, commanding a small flight of such riders who patrolled the shores of Lordaeron for any hostile draconic activity after the Second War. Falstad and his comrades protected the town of Hasic from certain doom, and then transported human mage Rhonin and his companions across the Great Sea to Khaz Modan. During the journey, however, the group was ambushed and Falstad's kinsmen were killed. Nevertheless, at the incentive of Vereesa Windrunner, Falstad continued to Khaz Modan. Later, with the help of a clan of hill dwarves, Falstad reached Grim Batol and fought in the final battle there to free the Red Dragon Queen Alexstrasza.

Falstad Wildhammer is a level 50 quest giver located at Aerie Peak in the Hinterlands.

He starts the following quest:

Falstad Wildhammer's Copper Coin may be found in the wishing well of Dalaran. It reads "I hope I end up in another book eventually."

Falstad Wildhammer was to be seated in the Council of Three Hammers, but in the early Beta was replaced by Kurdran Wildhammer. At Blizzcon 2010 this alteration was raised and it was stated that Falstad should be reclaiming his seat. In Cataclysm Beta Build 13221 (after Blizzcon 2010), Falstad had returned and is accompanied by an NPC: Wildhammer Fact Checker, a homage to the Red Shirt Guy.

Falstad Wildhammer can be recruited as a follower by an Alliance player after completing the appropriate quest chain. He will also stand near the mission table at Wind's Redemption once he is recruited.

Falstad does have a cameo appearance later in the novel Stormrage in which he appears with Rhonin and Vereesa Windrunner at the wedding of Malfurion Stormrage and Tyrande Whisperwind.

Falstad also appears as an Assassin in Heroes of the Storm. 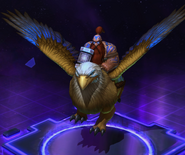 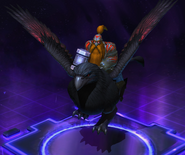 Falstad as a Dark Iron Dwarf in Heroes of the Storm 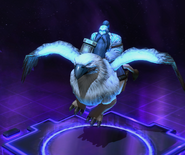 Retrieved from "https://wowwiki.fandom.com/wiki/Falstad_Wildhammer?oldid=2856312"
Community content is available under CC-BY-SA unless otherwise noted.