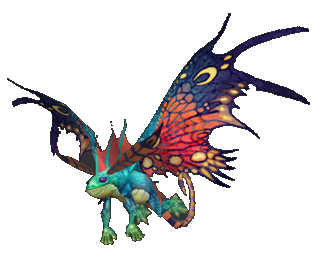 Faerie dragons, also known as sprites or blink dragons, are fey that look like flying lizards (much like a chameleon with butterfly wings). Though not actual dragons, these mystical looking creatures police the Emerald Dream from magic. As such they are immune to magic.[1] (TFTMan 17)

They have long been used by the night elves in their endeavors. They have a powerful natural defense against magic and the unique ability to phase out of reality. The Faerie Dragon's defense mechanism appears to work by encasing itself within a strong energy shield, which repels most magic and conventional attacks. While in this form they can siphon the unused magical energy wasted in basic spell casting, and then focus, amplify, and direct it back at the unfortunate caster in a sort of "feedback" attack. This ability is very powerful but requires a great deal of effort, and can only be used sporadically, requiring the dragon to rest between uses. For this reason, the faerie dragons often travel in packs.

This creature resembles a dragon in some respects, but feathery antennae sprout from its head and its wings are moth-like. Its turquoise scales shimmer in the sparkles that dance from its body. It turns its head to look at you with a beady black eye before emitting a small keen.

Faerie dragons are not true dragons, though they share similar traits in appearance (some are tagged as 'Dragonkin' though) They are mystic creatures that protect the Emerald Dream from hostile magic, occasionally they join their night elf allies in Azeroth's battles as well. Previously, it was thought that faerie dragons do not speak.[2] (APG 207) However, there have been recent examples in Mount Hyjal of faerie dragons that are capable of simple speech.[3]

After the second invasion of the Burning Legion, Malfurion Stormrage summoned them from the Emerald Dream to help purge the night elf forests of demonic magics. They were called into service briefly during the night elves' hunt for Illidan, but it appears that the vast majority of these beasts have returned to the Emerald Dream along with Malfurion. The only large population left on Azeroth is located in the untainted forests of Feralas. Many also live in Ashenvale. However, they seem to lack the powers that a normal dragon has; possibly attributed to their lack of connection with the Emerald Dream. The Grimtotem tribe of tauren has recently been endangering the group in Feralas, capturing them for experimental use.

There have also been reports of the Faerie dragons in the Talon Den in Stonetalon Mountains. It is likely that when the druids of the den awoke from the Emerald Dream, the dragons came with them in some way. One notable is Nal'taszar.

These creatures have also been found in Dire Maul's west wing. It appears in their instinctual duties of policing magic, these hapless dragons wandered into the wing in an attempt disrupt the corrupting energies pulsing through the ruins, but fell prey to the ghostly Highborne and now serve them as pets.

One faerie dragon can also be found in the Barrens, inside the Wailing Caverns. Altered by the Emerald Nightmare, this one is called a "Deviate" Faerie Dragon. It counts as a rare boss, thus giving players have a small chance of encountering it when visiting the dungeon.

Every six hours (approx.) a group consisting of six faerie dragons surround a mushroom circle[17.6, 67.5] ("faerie ring") hidden in western Tirisfal Glades, an area known as the "Whispering Forest". They sing a unique melody in what seems to be some kind of purification rite. Corrupted animals such as deer, bears, and squirrels approach the circle and stand listening while the faerie dragons sing. As of Patch 6.1, you can obtain their song (

[Music Roll: Faerie Dragon]) from an egg in the [Faerie Dragon Nest] at the center of the circle for your garrison jukebox when this occurs.

As a non-combat pet 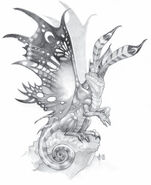 A faerie dragon as seen in Warcraft III.

Retrieved from "https://wowwiki.fandom.com/wiki/Faerie_dragon?oldid=2813093"
Community content is available under CC-BY-SA unless otherwise noted.