For other uses, see Eye.

The Eye of Eternity (also known as EoE) is the final instance of the Nexus in which the final (and only) boss is the blue Dragon Aspect, Malygos.

The fight against Malygos is comparable to the fight against Onyxia in that he is a solo raid boss housed within his own instance. To begin the fight you will need to use the Key to the Focusing Iris or Heroic Key to the Focusing Iris, which drops from Sapphiron in Naxxramas (on 10 and 25-player modes, respectively) once per kill. The Heroic Key can start the fight in both the 10-man and 25-man versions. After the release of Cataclysm, the Keys are no longer required to enter the raid at any difficulty. 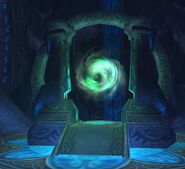 Retrieved from "https://wowwiki.fandom.com/wiki/Eye_of_Eternity?oldid=2682696"
Community content is available under CC-BY-SA unless otherwise noted.