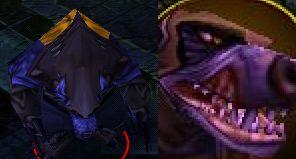 The Experiment Furbolg was released upon its guards by Kael'thas and Vashj in the Dungeons of Dalaran underneath the city of Dalaran. It was enhanced by the Dalaran wizards.

Its presence in Lordaeron suggests that high elven mages had brought some samples of the furbolg race to Dalaran, meaning that some furbolg were kept by the Highborne when they left Kalimdor. Other possibilities include that some polar furbolgs were captured by Dalaran agents, that an unlucky furbolg arrived by mistake in the Eastern Kingdoms and was immediately captured by Dalaran, or more simply that the night elves, very recent allies of the Alliance, sent some furbolgs to Lordaeron, and unfortunately the poor bears were sent to the destroyed Dalaran's dungeons, where alchemists and magi experimented on them. Maybe the overtaking of Dalaran by Garithos created this situation, knowing how he despised other races.

Retrieved from "https://wowwiki.fandom.com/wiki/Experiment_Furbolg?oldid=2380449"
Community content is available under CC-BY-SA unless otherwise noted.