Elwynn Forest, aka the Forest of Elwynn or simply Elwynn, is a vast woodland of stately hardwoods nestled just below the foothills of the Burning Steppes to the north. To the west are the dry prairie fields of Westfall. The idyllic Redridge Mountains lie to the east, and to the south, across the Jerod's Landing is where Duskwood is located.

It is the heartland of the human Kingdom of Stormwind and consequently is the starting point of all human characters. Elwynn is a gorgeous span of fertile land and thick forests. The weather is sunny and cheerful during the day and silent and peaceful at night. Unlike Duskwood, it is close enough to Stormwind to enjoy considerable Alliance guardianship.

Home to many farmers, loggers, and miners, Elwynn Forest is a tranquil region with several friendly places to stop. Little troubles this region; kobolds infiltrate some mines such as the Fargodeep Mine and Jasperlode Mine, and murlocs have moved inland to reside in some lakes and rivers such as Crystal Lake and Stone Cairn Lake, but overall it is safe.

One should stick to the roads though, as the forest is home to many fearsome and territorial creatures such as bears and wolves. Those who can defend themselves are not in any danger, but others may not be so lucky. Elwynn enjoys consistently good weather, warm and humid with very few stormy days. Gentle rain falls just enough to make everything grow full and lush.[1] This woodland is pleasant and tranquil. Loggers and fishers fuel Stormwind’s economy, and a diligent militia keeps it safe from the kobolds and murlocs that occasionally surface. The Defias Brotherhood, a group of robbers and bandits wearing red masks, were once a growing menace in the region.[2]

It is under guardianship of the kingdom of Stormwind, but has its own democratic government.[1] Marshal Dughan is the elected ruler. Though much of the forest was burned down during the First War trees and lush glades have grown back.[3] Stormwind City lies northwest of the forest and is heavily patrolled by the Stormwind guards.

The humans have lived in Elwynn for centuries, but members of all Alliance races can be frequently seen traveling and residing in Elwynn due to its proximity to the capital, Stormwind. Most residents of Elwynn are involved in one of its major industries: logging, farming, fishing or mining. The people are hardy and hard-working.

The region organizes its festivals and celebrations around the planting calendar, its two biggest parties being the planting and harvesting festivals. Elwynn is also visited periodically by the famous, traveling Darkmoon Faire monthly. True criminals in the area are usually sent to Stormwind for trial and punishment in the Stockade which is also a dungeon, as most people care more for their jobs than housing criminals. Goldshire has a small holding area for drunks and pickpockets, but few stay in the clink for very long. Elwynn’s towns will welcome most any travelers, especially those who want to shop or trade to help the local economies. They are especially kind to those willing to lend a hand in a tough spot.[4]

Little is known of Elwynn's history before Stormwind was founded centuries ago by the Arathi bloodline of Stromgarde in Lordaeron. Ever since humans first settled in the forest, it has thrived under their stewardship.

Elwynn Forest was captured by the Horde during their bloody campaign to Stormwind in the First War. The resources culled from the bountiful woods helped fuel the Horde's war machine. Much of the forests were razed as the orcs marched across Elwynn. The town of Goldshire and the Abbey at Northshire were both tragically destroyed. When Stormwind fell to the orcs and Anduin Lothar led the humans to Lordaeron, the Stormreaver and Twilight's Hammer clans assumed domains in Elwynn Forest. When the humans of Stormwind finally retook their city at the end of the Second War, they regained Elwynn as well. It cost the kingdom of Stormwind a significant amount of gold and resources to rebuild their broken homeland. As a result, the kingdom's economy has flagged since it was rebuilt. Many of the middle and lower classes became fed up with high taxes and unpaid labor in service of the kingdom.

Many of these dissidents defected to form the Defias Brotherhood (led by the Stonemasons Guild, the architects who reconstructed Stormwind and weren't paid anything). The Brotherhood reaches into Elwynn Forest from time to time, preying on lone travelers, although their main center of operations lies somewhere in Westfall. Some say they have a case against Stormwind, as they weren’t paid for their work rebuilding the city; others say they are whiners who charged too much in the first place. Others (such as Brann Bronzebeard) did their work and were paid, and don’t understand the problems.[4]

Yet, against all the odds, Elwynn has returned to much of its former majesty and glory. Northshire Abbey was rebuilt and has become a recruiting center of sorts for the Stormwind army. Goldshire and its famous Lion's Pride Inn have returned to their former glory as a bustling hub of activity. Today, the only reminders of the Horde's occupation are a few scattered orcish catapults, broken and rotting. Meanwhile, the humans of Stormwind rejoice as Elwynn once again becomes the pride of the Kingdom of Stormwind.

This section concerns content exclusive to Cataclysm.Though the majority of Elwynn remained untouched during the devastating Cataclysm, the Northshire Vineyards were not as lucky. The Defias that once roamed here harassing the settlers have all been killed, and the area burns as Blackrock orcs harry the countryside. The Blackrock Orc

leader, Kurtok the Slayer replaces Garrock Padfoot who was one of the leaders of the Defias.

The Defias Brotherhood had camps throughout Elwynn Forest, but with the ascendance of Marshal Gryan Stoutmantle and the Westfall Brigade having largely crushed the Defias in Westfall, not even a few scattered ruffians remain. Dead-Tooth Jack, Morgan the Collector, Erlan Drudgemoor and Surena Caledon still harass the locals, but no longer as part of an organized gang. There are rumors the Defias had a relationship with the kobolds in Elwynn Forest, enlisting them to collect gold from the mines. They may have been associated with the Riverpaw Gnolls along the border of Westfall. The Westbrook Garrison still sends out patrols to search for thieves entering Elwynn Forest from Westfall.

Elwynn lies below the southern foothills of Blackrock Mountain. The forest is a labyrinthine mixture of rushing rivers, various lakes, gold mines, and forests of magnificent trees and lush glades. Its rich farmland is a result of frequent rains. Recently several of the lakes have been found to be inhabited by hostile murlocs. Stormwind City itself sits proudly in the northwestern hills of the region, its gates opening down onto the Forest. East of Stormwind and behind a thick wall lies the peaceful Northshire Valley and its Abbey. Northshire was the pride of Stormwind's vineyards until recently, when Defias bandits drove off the farmers and occupied the farm and fields. In addition, the Echo Ridge Mine north of the abbey has been infested by kobolds.

Bears, wolves, spiders and boars constitute the bulk of the region's large wildlife. The creatures are hostile everywhere except for Northshire. The roads leading from Stormwind and Northshire converge to the southeast just north of Goldshire. Goldshire is Elwynn's largest settlement besides Stormwind itself. Second to Goldshire is the Eastvale Logging Camp in the east near the border with Redridge Mountains. Eastvale is the center of Elwynn's lumber industry. On the road from Goldshire to Eastvale is the Tower of Azora where mages conduct arcane experiments in seclusion. On the road to Westfall from Goldshire is the imposing Westbrook Garrison. This barracks and surrounding grounds house a number of the Stormwind Guard, and protects Elwynn's western border. Dotted throughout the forest are small farmsteads growing crops such as wheat, pumpkins, melons and grapes.

Kobolds infested the Jasperlode Mine and Fargodeep Mine. Gnolls have erected camps in the Forest's Edge region and the northern rim of Stone Cairn Lake. It is rumored that both the kobolds and gnolls were somehow associated with the Defias Brotherhood. Murlocs have taken up residence in and around Stone Cairn Lake and Crystal Lake. The Defias once had holdings at Mirror Lake Orchard, the Brackwell Pumpkin Patch, Jerod's Landing and Stone Cairn Lake.

Alliance
Stormwind City is the human capital and has a dock that has voyages that connect to Rut'Theran, Teldrassil in Kalimdor and Valiance Keep, Borean Tundra in Northrend. All zones bordering Elwynn, including Redridge Mountains, Westfall, and Duskwood are all Alliance-controlled, and a simple walk up any of their main roads will lead to the forest.

Horde
Horde players have a few options in getting to Elwynn, especially important when the Darkmoon Faire is in town. The first option is to run from Grom'gol Base Camp in Northern Stranglethorn, then through Duskwood and across the northern river. The second option, if a player is high enough, is to run from Flame Crest in the Burning Steppes and through the Redridge Mountains.

Elwynn Forest is home to several humans of high status. From Northshire Abbey Marshal McBride recruits promising young humans into the Army. In Goldshire, Marshal Dughan leads the effort to reclaim Elwynn from the kobolds and other vile threats, and from his post near Eastvale Logging Camp, Guard Thomas seeks to eradicate the foothold the murlocs have established in the forest. Deputy Rainer is currently the leader of the Westbrook Garrison and protects the border from the Riverpaw Gnolls.

Elwynn Forest is the starting zone for humans. The quest range here runs from level 1 to 12 with the earliest starting quests concentrated in Northshire Valley. In southern Elwynn player witness the rivalry between the Stonefields, Maclures, and Brackwells and do quests on both sides (the Brackwell Pumpkin Patch is currently overrun by Defias). The quests also include fighting the murlocs near Crystal Lake and Stone Cairn Lake and the kobolds in the two big mines - the Fargodeep and Jasperlode. But the strongest recurring threat are the Defias Brotherhood (strangely, most of them are situated in Eastern Elwynn, having their base somewhere in Westfall).

Two quest chains run adventurers back and forth between the rival farms of the Maclure and Stonefield families. Although not a quest chain, Red Linen Goods sets the Defias threat early. Meanwhile, the drop quest The Collector could help link the gnolls near Ridgepoint Tower to the Defias.

Northshire Valley is the starting subzone with the level 1-5 quests. Goldshire is the central village for those following most zone quests and suggested home inn for levels 6-10. Stormwind City is the capital, with all level quests geared to quests that draw adventurers to other zones.

Elwynn Forest, post-Cataclysm (current)
Add a image to this gallery

Note: The Stockade is in Stormwind City.

Goldshire
Add a image to this gallery

Eastvale Logging Camp
Add a image to this gallery 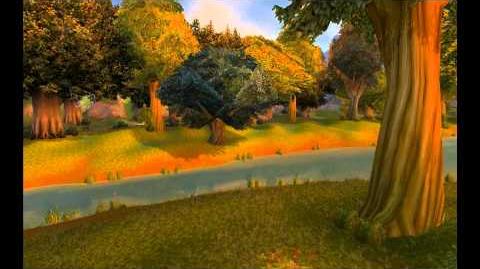 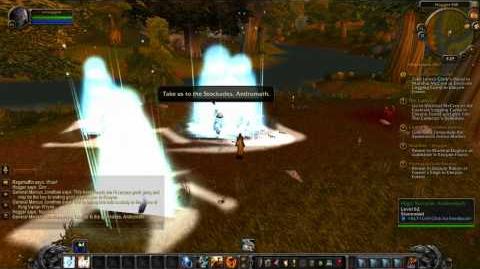 Retrieved from "https://wowwiki.fandom.com/wiki/Elwynn_Forest?oldid=2854623"
Community content is available under CC-BY-SA unless otherwise noted.