This article is about the Cataclysm world event. For elemental invasions in classic WoW, see Elemental Invasions.

The Elemental Unrest (also called just the "Elemental Invasion") is a world event that heralds the Cataclysm. Every few hours, elementals attack Stormwind, Orgrimmar, Ironforge, and Thunder Bluff. If players can defeat these elementals and free trapped citizens within their entire city, they will be granted access to two special boss encounters. During the event, a player can venture out into the world to destroy rifts, which grant an achievement only obtainable during the elemental invasion: Tripping the Rifts.

Random earthquakes have been reported in the major cities and zones of Azeroth. In response, the faction leaders of the Alliance and Horde have gathered in Stormwind and Orgrimmar respectively to deal with this turn of events.

This phase was released on the 1st of November, 2010. The day the phase started, Zarhym stated "There are four stages of the event. We're on the first."[1]

The following changes are made to the world:

Events related to the Alliance.

Events related to the Horde.

Rifts have begun to form randomly in all questing zones, spawning elementals; the spawn timers are erratic, and not tied to the beginning of the hour. The first phase of the quest chains are now active. Earthquakes are now felt around the world, and not just in capital cities. Doom-preaching cultists and mysterious devices have appeared in Orgrimmar and Stormwind.

To obtain the Feat of Strength Tripping the Rifts, players must obtain a buff from each type of elemental portal that spawns in Kalimdor, Eastern Kingdoms, Outland and Northrend (Earth, Fire, Water, and Wind). Players do not have to kill rifts of their level to qualify for the achievement. The daily quests Hammering It Out and A Natural Occurrence are obtained from the mysterious devices left after the portals have been defeated. Player level must be within typical honor/experience granting range to receive the quest.

See Quest:Prophecies Of Doom to begin the quest chains.

For a full list of Elemental Rift spawn locations, see

This phase was released on the 8 November 2010 and simply opened up a few more quests in Orgrimmar, Stormwind and Ironforge.

After the Elemental Invasion event:

This phase was released on 15 November 2010.[3] The elemental rifts in Kalimdor and Eastern Kingdoms now spawn with very high frequency, about every 10–15 minutes.

Before every invasion event starts, a guard will yell, warning players and citizens about incoming danger. At this time, players are instructed to grab barricades/sandbags from stockpiles around their major city and place them in zones directed by a red arrow. Low-level players unable to participate in this event are instructed to evacuate to the nearest portal activated by several guards. When all barricades are placed or 5 minutes have elapsed, the battle against the invasion begins.

All of the districts of the major city will be attacked by elementals spawning from opened rifts. Every elemental has about 320,000 HP and every rift will spawn elementals until 32 are destroyed. Several citizens are trapped in these districts and must be freed by an [Earthen Ring Unbinding Totem] provided by Earthen Ring Defenders. Players must clear the city of every rift and rescue every citizen within an hour in order to win the event.

When the attack begins, all NPCs and interact-able objects within the city will despawn. This means flight masters, signposts, fires, mailboxes, bankers, auctioneers, trainers, questgivers, and more will be inaccessible for the duration of the attack. In Stormwind and Ironforge, the Deeprun Tram cannot be entered. Instance portals to The Stockade and Ragefire Chasm are also unavailable, as are the two-way portals in Stormwind's Wizard's Sanctum (evacuation portals exist within the Sanctum, so those inside and those teleporting to Stormwind can get out, but there is no direct path to the outside while the invasion is active), and all portals to the Blasted Lands. City guards will be replaced with level 80 versions (regular city guards are level 75), and additional guards will spawn at key choke points. Boxes containing [Sandbags] (Stormwind), [Wind Breaks] (Thunder Bluff), [Fortifications] (Ironforge), or [Barricades] (Orgrimmar) will appear throughout the city as well. At this time, players are instructed to grab barriers from stockpiles around their city (marked by green arrows) and place them in the designated regions (marked by red arrows).

Events related to the Alliance.

In Stormwind, Earthspeaker Nala appears in center of Trade District. He acts as an Earthen Ring Defender.
In Stormwind, General Marcus Jonathan holds his position in Valley of Heroes, to warn approaching players of the danger they would face.

Events related to the Horde.

In Orgrimmar, Warden Gartok Ragefist, his Detained Cultists, and the captured in the Ring of Valor remain in place.
In Orgrimmar, Earthcaller Torunscar relocates to the entrance of the Valley of Strength. He acts as an Earthen Ring Defender.
In Orgrimmar, Blood Guard Kang holds his position guarding the southern entrance to the city.

Earthen Ring Defenders also spawn through the city. Speaking to one of them, players can obtain an [Earthen Ring Unbinding Totem]. Each city also provides an avenue of rapid escape in the form of Evacuation Portal maintained throughout the city by Orgrimmar Mages (among the first orc mages seen before Cataclysm) in Orgrimmar, Forsaken Mages (undead) in Thunder Bluff, Ironforge Mages (gnome and dwarf- among the first dwarf mages that aren't Dark Iron dwarves seen before Cataclysm) in Ironforge, and Stormwind City Mages (human) in Stormwind. These Evacuation Portals can be used to teleport directly outside the main entrance to the city. Low-level players and those unwilling to defend the city are advised to evacuate through an Evacuation Portal. Although low-level players are able to participate in the event, the invading elementals have area of affect attacks that will likely instantly kill less powerful players if they are caught within them. Alliance and Horde heroes will appear in some districts as well.

During the invasion, Stormwind and Thunder Bluff are hit by powerful rainstorms as they are invaded by Air and Water elementals. Orgrimmar and Ironforge are set ablaze as they are invaded by Fire and Earth elementals. During the initial phase, the elementals will attack any player, or city defender in range. Unlike the elemental invasions outside of the major cities, the elementals attacking the cities are not subject to immunities or resistances. The elementals will sometimes trap their targets in place. When this happens, an [Earthen Ring Unbinding Totem] must be used to free the player or NPC (or simply wait the stun out). Freeing players and NPCs in combat will grant the First Responder buff, and will not place you in combat. Each target within the area of effect of the totem will apply one stack of the buff, so freeing several targets at once will apply multiple stacks. When all barriers are in place, the second phase of the invasion begins.

Elemental Rifts appear in each of the major districts of the cities, with each Rift spawning new elite elementals. Elite elementals that are killed are replaced with new ones by the rift. Every elite elemental has about 320,000 HP and every rift will spawn elite elementals until 32 are destroyed. As with elemental rifts outside the cities, only kills in which a player participates will count for damaging the rift (guards cannot close the rifts by themselves). The elite elementals are passive to players unless attacked; however, their area of effect abilities are still hazardous to nearby players and can one-shot lower-level characters. Any elementals remaining from the previous phase will still attack any player it sees unless already engaged in combat. Numerous Trapped Citizens are in need of rescue within the attacked districts and must be freed using the [Earthen Ring Unbinding Totem]. Freeing citizens will also grant the First Responder buff. On the top of the screen, the player can see how many districts in the city are still under attack, how many rifts remain in the current district, and how many civilians remain trapped in the current district. The zone map will also display flags in the districts that haven't been cleared yet and Horde/Alliance symbols in the ones that have.

After players defeat 32 elementals surrounding a rift, the rift will close and a buff will be applied to all players nearby:

These buffs do count for

Players must clear the city of every rift and rescue every citizen within an hour in order to win the event.

This section needs to be cleaned up to a higher standard of quality. Reason: Wowpedia version may have been updated.

These tables are somewhat incomplete. Some numbers may be higher than recorded. The quote lists below are also incomplete.

49 [Fortifications] to be placed.

All Wind Breaks in place
Cairne Bloodhoof yells: Elemental rifts have opened up around the city. We need to shut them down now! Evacuate all non-combat ready citizens. Make sure they get to safety!
Hunter's Rise secure
Aponi Brightmane yells: We have secured the Hunter's Rise! All invaders have been repelled and the evacuation has been completed!
Spirit Rise secure
Baine Bloodhoof yells: Spirit Rise is secure! The invaders have been eliminated and the evacuation is complete!
Middle Rise secure
Cairne Bloodhoof yells: The Center Rise has been reclaimed! The Earthmother be praised!
Failure
Maruut Stonebinder yells: Enough! The Earthen Ring will temporarily stop the invasion. But be warned, the elementals will return!
Hero NPCs may yell one of the following while fighting near another player

If an hour has elapsed since the start of the event, Earthen Ring Defenders will intervene and suddenly halt the invasion, removing all elementals from the city. However, players will not benefit and will have to wait until the next event occurs.

If players successfully secure a major city, two types of portals to special boss encounters open up for thirty minutes. The portals are always paired with their counterparts. In Orgrimmar, immediately upon victory, Garrosh will lead a counter attack, running directly into the portals. The NPCs and objects then respawn and the city continues to function as normal until the next attack. (The city leader also appears at his normal spot in addition to his appearance in the dungeon.)

If players successfully secure a major city, two portals are available to enter for the next 30 minutes to fight one of the four lieutenants Cho'gall commands:

The leader offers a non-repeatable quest to kill the boss and then report back to the capital city with news. However, the boss can be killed as often as desired during the thirty minute window for a chance at item level 251 epic loot.

There were multiple bugs with the event on many realms, particularly in Thunder Bluff and Ironforge. Bugs included Trapped Citizens being out-of-phase and unable to be freed, duplicate NPCs and chat messages, Trapped Citizens remaining visibly trapped even after being freed, Elemental Rifts no longer spawning elementals but not closing. These bugs would occur during some invasions but leave others untouched. Often the bugged invasions would make it impossible to access the bosses. These bugs may have been the reason the portals were later "locked" into being permanently open on November, 22, 2010 (the final day before the Shattering).[4] 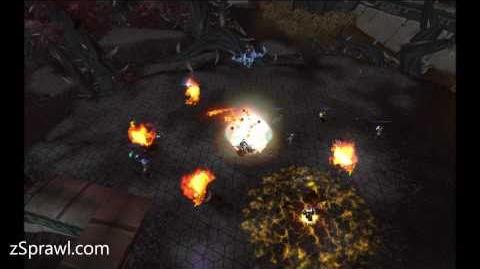 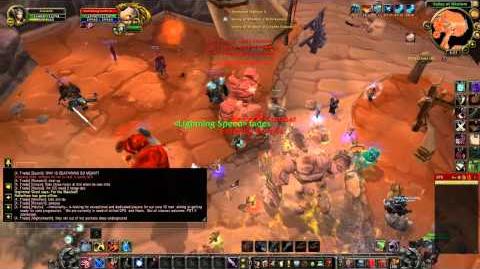 Game Elemental Unrest
Add a image to this gallery

Retrieved from "https://wowwiki.fandom.com/wiki/Elemental_Unrest?oldid=2795886"
Community content is available under CC-BY-SA unless otherwise noted.