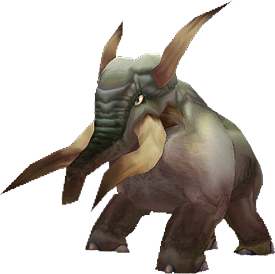 Elekk are a species of large, elephant-like creatures native to Draenor that the draenei commonly employ as mounts. They are found mostly in the northern and eastern parts of Nagrand — where neutral Wild Elekk roam its lush plains (while being preyed upon by poachers for their ivory tusks) — and in the southern region near Oshu'gun — where they congregate into large herds of hostile bull elekk with the giant elekk matriarch Tusker at their head. The Burning Crusade bestiary also reports that "There are accounts of packs of rock flayers taking down even mighty elekk that had wandered into the rock flayers' territory." 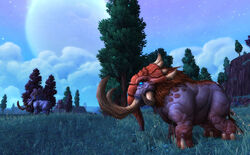 The majestic elekk graze contentedly across the grassy plains of Draenor, relying on their huge size and the support of the herd to keep predators at bay. Draenei explorers have determined that the animals pose no threat, as long as their young aren’t endangered or their water supply jeopardized. With the endurance to cover great distances and the ability to defend themselves by ramming or stomping attackers, these beasts have emerged as the draenei transport of choice. Explorers should take note of persistent draenei rumors that the Thunderlord Clan orcs torment and twist terrified elekk into vicious weapons of war, covering them in armor plating and inciting them to rampage when turned loose on their foes. Beware!

The recent influx of different races to Outland, particularly the ethereals, has resulted in increased hunting of the native elekk of Nagrand for their prized tusks. Yet in addition to being seen as game, these massive beasts are also valued for their ability to act as mounts. When the draenei fled Outland aboard the Exodar, they carried with them a number of species, including tamed elekk. Upon landing on Azeroth, these tusked-creatures played a large role in helping the draenei establish themselves on their strange new home. While much of Azeroth’s own native wildlife has served other races as trustworthy mounts, the draenei still prefer the hearty and unyielding elekk above all else.[1]

Elekk are sold by Torallius the Pack Handler located at the exterior elekk stables north of the entrance to the draenei capital of the Exodar. Irisee the Exodar Quartermaster in Icecrown also sells two unique Elekks.

Kessel, the draenei elekk lord in the southern part of Bloodmyst Isle, temporarily allows Alliance players to ride his elekk for 15 minutes in the quest "The Kessel Run". It provides 100% movement speed, which is enough to get to Stillpine Hold, Azure Watch, Odesyus' Landing, and then back. Players can be dismounted either manually (right-clicking the icon), by jumping into water, by entering a building/cave, or by attempting to travel across the bridge to the main part of Bloodmyst Isle. Certain buffs and spells, such as shaman weapon buffs, also dismount the player. 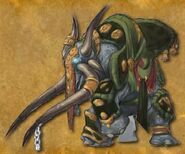 Early concept artwork of an elekk. The modern elekk has little resemblance to it. 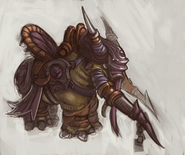 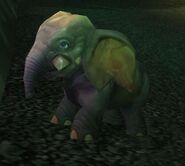 A draenei on an elekk. 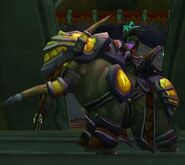 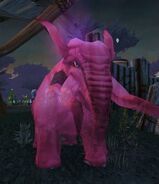 Pink Elekk, which appears when drinking in Allerian Stronghold.
Add a image to this gallery


Retrieved from "https://wowwiki.fandom.com/wiki/Elekk?oldid=2837669"
Community content is available under CC-BY-SA unless otherwise noted.