East of The Barrens, Kalimdor [58, 50]
Durotar.[58, 50] the land named after Thrall's father, Durotan,[1] lies on the eastern coast of Kalimdor. It borders the Barrens to the west and the coastal lands of Azshara to the north. The land of Durotar is rocky, and the soil is cracked and red, not unlike the orcs' Draenorian homeland. The land has many crags and canyons, where various dangerous creatures take residence. It is a harsh land to survive in; it is very dry and hot, and the vegetation and freshwater access is sparse.

The orcs, however, see a harsh beauty in the land that reminds them of their home world. Durotar is a proving ground for young orcs, who are sent to the Valley of Trials to complete several rites of passage before they are considered fit for the challenges that lie ahead. Durotar is the new homeland of the orcs and the site of the orcs' principal city of Orgrimmar. While the orcs founded their city of Orgrimmar here, Durotar has become something of a haven for all of the Horde races, especially the trolls.

For many years, Durotar was home to the quilboar. Then Thrall, Warchief of the orcs, brought his race to Kalimdor in search of a new homeland after the war against the Burning Legion. The young warchief named the land after his father, Durotan. Upon this land, he laid the ground for the orcs' new capital city of Orgrimmar, named for the previous warchief and hero of the Horde, Orgrim Doomhammer.[2]

The quilboar were tenacious in their attempts to stave off the Horde incursion, but ultimately they were no match for the unified might of the orc clans. The bristled "boar men" were driven back in a series of decisive orc victories along the northern canyons and ultimately pushed to the most remote regions of Durotar and even into the Barrens. The orcs claimed the coastal realm as their own, but the quilboar vowed to reclaim it someday.[3] The orcs gained valuable allies in the Darkspear Trolls, and also forged an alliance with the Tauren by assisting Cairne Bloodhoof and his people in driving away the marauding centaurs from their lands.

The capital of Durotar, Orgrimmar, is host to 14,000 inhabitants. In all, Durotar has a population of 21,000, the majority of which is of orcish blood. 65% of those living here are orcs, 20% are trolls, 15% are tauren, 8% Forsaken, and the smallest, humans, at 2% of the population. It is ruled as a tribal chiefdom by Warchief Thrall. Major settlements include Orgrimmar, Razor Hill, and Sen'jin Village, with respective populations of 14,000, 3,000, and 2,000. Spoken here are the languages of Orcish, Common, Low Common, Taurahe, and Zandali, otherwise known as Troll.[2]

Noted explorer Brann Bronzebeard had this to say about the area when he visited:[2]

Durotar is the most populated of all Horde-controlled regions, as well as their cultural center. Here, young orcs, tauren, and trolls study shamanism and hunting. There is a strong sense of unity here, although a number of Horde members are disturbed by the growing presence of the Forsaken in their lands. I expected this central point for the Horde to also be a major battlefield, and that I would be attacked on sight — I couldn't have been more wrong. Most of the people here are trying to live normal lives, focusing on agriculture and spiritual pursuits. That doesn’t mean their guards didn’t try to rough me up, but after I put the first couple of them on the floor, the rest were smart enough to realize they would be dead if I wanted them to be. After that, most of the people left me alone — a few were even willing to talk to me. I suspect some of them had never seen a dwarf before.

Beyond the Horde, harpies, centaur and quilboar are prevalent in specific regions of Durotar, attacking caravans and neighboring villages. These prove to be some of the first challenges for young warriors before they move on to bigger battles; these creatures are hardly organized enough to pose a major threat.

Just prior to the events of the Cataclysm, the leader of the Darkspear trolls, Vol'jin, rallied his forces against his long-time nemesis, Zalazane, to retake the Echo Isles. The Isles now serve as a proving grounds for the trolls, leaving the orcs to their own devices within the Valley of Trials.

After the Cataclysm, the Alliance have pushed into Durotar. From Northwatch Hold they have taken Kolkar Crag from the centaurs and retain a strong presence within Tiragarde Keep.

The Horde have not sat idly by, however, and the most glaring proof of this is the total rebuilding of Orgrimmar from the ground up. Bladefist Bay is now riddled with fortifications all the way to the capital, and the zeppelin towers have been moved inside the walls of the city. Horde forces are attacking the Burning Blade clan at Skull Rock. Even with the build-up and fighting, the Valley of Trials has been made more accommodating for young orcs, new amenities such as a mailbox and training dummies added.[4]

The geography of Durotar is similar to that of the orcs’ original homeland of Draenor, which is probably part of the reason why they are so comfortable settling here. The land is dry, baked red by the sun and littered with cacti and watering holes. The landmass itself is a long expanse separated from mainland Kalimdor by the Southfury River. Durotar is south of Azshara. The southern tip of Durotar ends at the Great Sea. The eastern coast is littered with sunken ships and considered to be a prime scavenging spot. The wildlife of the land includes boars, scorpids, raptors, crocolisks, thunder lizards, and makrura.[2]

The goblin port of Ratchet stands to the south, with the ruined shores of Azshara some distance to the north. The region is warm and rocky, but not as arid as the rest of the Barrens. A fair amount of vegetation grows thanks to the warm easterly winds blowing in from over the ocean, but truly fertile soil is rare, making farmland precious. Sagebrush on the plains and thin pine forests at higher elevations combine with rugged hills and canyons to break up the landscape. Orcs are by far the major inhabitants of Durotar.

Quilboar cluster in the canyons along the northwestern borders and encroach from the Barrens to the west. Centaur warbands make the occasional foray, and furbolgs and undead have been seen in more than one instance. Herd animals such as deer and goats roam the land, preyed upon by wolves and coyotes.

A number of Horde settlements have been established throughout the region, but much of the land has yet to be tamed. The cities and towns scattered along the frontier are heavily fortified against attacks from quilboar raiders, centaur warbands, rogue furbolgs, and even sudden appearances by undead and the occasional demon. Caravans are common targets, creating a strong market for caravan guards.

The few large cities are distant from one another, with a variety of smaller encampments and villages scattered in between. Given that Durotar is the orcs' new homeland, Horde races and independents are welcome throughout the region. Alliance races risk their lives when they venture into Durotar.[5]

There are no dungeons, raid dungeons, micro dungeons, or battlegrounds in Durotar. However, Ragefire Chasm can be found in the Horde capital city, Orgrimmar, which is located in this zone.

Parts of Durotar were irrevocably changed during the events of the Cataclysm. Both Drygulch Ravine and Thunder Ridge were flooded, and more water damage is evident from the flooding along Scuttle Coast, and the disappearance of much of the road from Razor Hill to the Northern Barrens. Areas reduced to marshes include lands on the east bank of the Southfury River and Tor'kren Farm.[6]

The Horde capital city, Orgrimmar, is located in this zone, and is a major travel hub for Horde characters. In addition, the Zeppelin towers in Orgrimmar carry players to the Eastern Kingdoms, to either Undercity or Grom'Gol Base Camp, and also the continent of Northrend, to Warsong Hold.

Alliance: The Alliance can travel up the coast of the Northern Barrens from Ratchet, and then cross the Southfury River.

Horde: The Horde can also travel from Ratchet, but have the option of walking from Azshara to the rear entrance of Orgrimmar.

Orgrimmar (above the Valley of Strength)

Note: Though there are no pools, the waters around Durotar can be fished successfully with a minimum skill of 25.

Durotar is home to several orcs and trolls of status. From the base camp in the Valley of Trials, Zureetha Fargaze sends promising young orcs and trolls out into the world. In Sen'jin Village, Master Gadrin mentors more young bloods in his quest to eradicate the newly landed humans in Southern Durotar, and from his throne in Grommash Hold, in the capital city of Orgrimmar, Warchief Vol'jin strives to repair the damage that nearly split the Horde in civil war. Previously, Warchief Hellscream sought to strengthen and expand the Horde war machine, until his downfall and flight to Draenor of the past.

Since Durotar is the starting zone for trolls and orcs, the quest range here is level 1-10. Quests in Durotar include a foray into the Echo Isles to the south to combat jungle trolls, battles against the human soldiers of Tiragarde Keep, and the hunt for the mysterious Shadow Council.

Durotar before the Cataclysm.

Durotar after the Cataclysm (current).
Add a image to this gallery

Durotar from Warcraft III.
Add a image to this gallery

The crags of Durotar.

Razormane Grounds
Add a image to this gallery

Alliance ships off the southern coast of Durotar

South Fury River flooding its banks and overflowing Eastern Durotar.
Add a image to this gallery 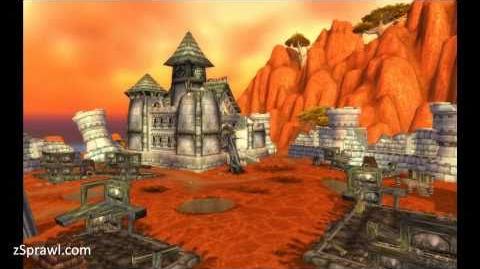 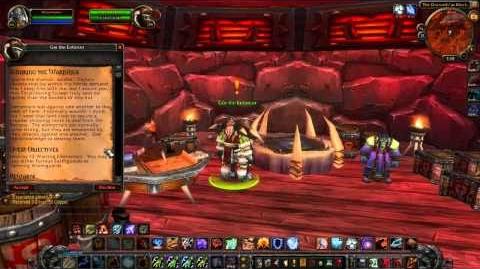 Cataclysm Beta - Durotar Overview
Add a image to this gallery

Retrieved from "https://wowwiki.fandom.com/wiki/Durotar?oldid=2862594"
Community content is available under CC-BY-SA unless otherwise noted.