Start a Wiki
watch 06:08
'World of Warcraft' Lore: Durotan
Do you like this video?

Durotan or the alternate-timeline version located on Draenor,

Durotan? Or perhaps the US realm, Server:Durotan US.

Chieftain of the Frostwolf Clan

Durotan, son of Garad, was the chieftain of the Frostwolf Clan, mate of Draka and father of the future Warchief Thrall. He was also a contemporary of Orgrim Doomhammer.

Durotan was the heir apparent to Garad, chieftain of the Frostwolf clan, in the years prior to the First War. He cared deeply about the world and those living in it. This sensitivity could have been the signs of being a Shaman, but for Durotan it was just the way he was. During a Kosh'harg festival in Nagrand, he met a Blackrock orc named Orgrim, son of Telkar Doomhammer, and the two became fast friends despite belonging to different clans. Durotan was also brought to the "sacred mountain" of Oshu'gun by request of the ancestors, seeking to test whether he could become a shaman as well as chieftain of his clan; alas, he did not see the ancestors, though he knew they were there somehow.

While racing each other through Terokkar Forest, Durotan and Orgrim were attacked by a rampaging ogre, and would have been killed if not for the timely arrival of a draenei hunting party from Telmor, led by Restalaan. Sending word to their clans, Restalaan took the two orcs to Telmor, and informed them that the draenei leader, Prophet Velen, was in the town and invited the two to dinner. They discussed their people's histories, Durotan even commenting that he and Orgrim had learned more about the draenei in that period than their entire race had in over a century.

Upon returning to his clan, Durotan met a young Frostwolf orc named Draka. Durotan was smitten at first sight, not believing that she could be a member of his clan. Though rebuffed (at first) when asking her to join him on a courtship hunt, the two eventually mated.

Chieftain of the Frostwolves

Some time later, Durotan's father Garad was killed in battle against a group of ogres and a gronn, and Durotan became the chieftain of the Frostwolf Clan by hereditary right. It was not long after this that Ner'zhul, the spiritual leader of the orcs and chieftain of the Shadowmoon Clan, called the clan chieftains and shaman to Oshu'gun. Ner'zhul told them what he believed the ancestors revealed to him - that the draenei were enemies of the orcish people. This was part of an elaborate scheme concocted by the eredar lord Kil'jaeden, one of the lieutenants of the Dark Titan Sargeras. Kil'jaeden had led the Burning Legion in a hunt for the draenei—renegade eredar who fled when Sargeras came - over the eons, but in the past had found only remnants of where they had been.

Durotan was dispatched by Ner'zhul to meet with a party led by Velen himself near Oshu'gun, where the Prophet revealed that what guided the spirits of the ancestors there was in fact a dying naaru named K'ure, who had aided the draenei escape from Argus 25,000 years earlier. This was met by suspicion and outright hostility by the orcs—particularly Drek'Thar, the Frostwolf clan shaman, who called Velen a blasphemer. Despite orders to bring the Prophet and his party to Ner'zhul, Durotan decided to release them, reasoning that there was no honor in taking a willing prisoner.

During a battle in which they were defeated by Restalaan's forces, the Frostwolf shaman realized they had been cut off from the spirits. Durotan and Draka took this as a sign that something was seriously wrong, even though Ner'zhul had told them the ancestors had told them that this was a just war. It was at this time that the orcs - under the guidance of the ambitious Gul'dan, Ner'zhul's apprentice - began to take the path of warlock magic. Durotan, not seeking to bring attention to himself by opposing the official stance, allowed Drek'Thar and his shaman to receive the warlock training.

The Warchief and the Siege of Telmor

Through Gul'dan's manipulation - empowered by Kil'jaeden - the clans were united into the First Horde, and several clan chieftains, including Durotan, ran for the position of Warchief. However, the clear favorite (and thus the one who received that title) was the battle-hungry Blackhand, chieftain of the Blackrock Clan. No one knew, of course, that Blackhand was in fact Gul'dan's puppet.

With information given to him by Orgrim (now known as Doomhammer, his father dying around the same time as Durotan's), Blackhand ordered Durotan to assault the city of Telmor, which was close to the Frostwolf clan grounds. While in Restalaan's care as a boy, Durotan had seen the guard captain pull a green crystal from a hidden place in the forest floor - Leafshadow, one of the shards of the ata'mal crystal, which projected an illusion that hid the city from ogres, gronn and other external threats. Orgrim had told Blackhand that Durotan possessed a keen ability of recall (which he did), and could remember the incantation to dispel the illusion. Durotan reluctantly did so, and thus the Horde sacked Telmor and killed everyone they could find, including Restalaan, who was defeated by Durotan himself.

Shortly before the attack on the draenei capital of Shattrath, Gul'dan called the clans to a mountain he named the Throne of Kil'jaeden in what is now Hellfire Peninsula, to partake of Kil'jaeden's "gift" - the blood of Mannoroth. Durotan—having been warned by the now-subservient Ner'zhul - refused to partake, as did his friend Orgrim...causing both to fall under the suspicion of Gul'dan.

Gul'dan sought to eliminate Durotan, and freed one of Blackhand's draenei slaves, blaming it on Durotan. Blackhand was enraged and he dueled Durotan, who had actually sheltered the draenei after finding her in the wilderness. The plan did not work however, and Durotan was not defeated and killed, for the draenei, Tanara, had left in the midst of the battle, and the two orcs had stopped fighting after they discovered this.

After the fall of Shattrath and the disappearance of Kil'jaeden, the Horde turned on itself, with no enemies left to fight. It was at this time that Gul'dan was visited in his dreams by the human sorcerer Medivh, who was possessed by the Dark Titan. Medivh commanded Gul'dan to construct a gateway, and that together they would open a great Portal between Draenor and the world of Medivh. Durotan continued to voice opposition against the Horde leadership. When the Horde crossed over into Azeroth, Gul'dan exiled Durotan and his entire clan.

Apparently accepting their fate, Durotan and the Frostwolf Clan settled deep in a hidden valley in the Alterac Mountains, far to the north of the Kingdom of Azeroth. There they lived throughout the First War. While there, Drek'Thar had forsaken the path of the warlock and was able to regain the favor of the spirits, and return to shamanism. His aid would be invaluable in surviving in the harsh lands which the Frostwolves now called home; in addition to ensuring that the encampment was not flooded in the spring thaw, they also befriended the white wolves that made the valley their home. It was at the end of the First War that Draka, Durotan's mate and most stalwart supporter, gave birth to Durotan's son and heir, the orc who would become known as Thrall. Realizing that there was far more at stake now that his legacy would live on, Durotan decided to take action against the evil Gul'dan, and travelled to the encampment of the only other orc who had stood by him: Orgrim Doomhammer.

Doomhammer had, by this time, assassinated Blackhand and become the Warchief of the Horde, and welcomed Durotan and Draka into his encampment. Durotan explained what he knew - about Gul'dan, the Shadow Council, the demonic bargain. Doomhammer vowed that he would stand at Durotan's side as they confronted Gul'dan with his crimes, but - for the good of his warriors and Durotan as well - he had to send them away to what he thought was a safe place. It was found out later that several of Doomhammer's warriors had been Gul'dan's spies...and one of them had accompanied Durotan and Draka to their "safe haven".

The treacherous guard had summoned assassins to kill the Frostwolf chieftain and his mate. Though he managed to kill at least one of them, Durotan was too severely wounded to continue. His arms sliced off to prevent him from holding his child again, Durotan died slowly as the lifeblood drained out of him, the last thought in his mind being a sense of relief that he would not see his son torn apart by the creatures of the forest.

Durotan makes an appearance in Warlords of Draenor, ruling over Frostfire Ridge as the Chieftain of the Frostwolf clan. He is an ally of the Horde in their fight against the Iron Horde.

Rend and Maim, the sons of Blackhand, were intended to be Durotan and Draka's assassins, as played out in the game Warcraft Adventures.[3] However, the game was cancelled, the story being told instead by the novel Lord of the Clans by Christie Golden, depicting unnamed spies of Gul'dan as the assassins.[4] In Burning Crusade flash site,[5] it is told that Thrall's parents were assassinated by humans,[6] which contradicts all sources. The events depicted in Lord of the Clans are generally accepted as what actually happened, the other sources being described as either mistakes or outright retcons.[citation needed]

This section concerns content exclusive to the Warcraft movie or its sequels.In the Warcraft movie, Durotan is defeated and killed by Gul'dan in Mak'Gora, albeit by dishonorable tactics, such as draining his life force while in combat until he could no longer fight.

Durotan is buried in Alterac Valley, under a monument known as the Rock of Durotan. The inscription on the memorial plaque reads:

Here lies Durotan - first Chieftain of the Frostwolf Clan, and father of our honored Warchief, Thrall. He was the bravest of our kind - betrayed by those who would see our people enslaved. Durotan gave his life that our freedom might be gained. We honor him—and the legacy he passed onto us through his son.

-Drek'Thar, Far Seer of the Frostwolves

Thrall survived after Durotan's death, found by the human officer Aedelas Blackmoore and raised as a slave and gladiator. He would eventually escape, be trained as a shaman by Drek'Thar, and lead in the liberation of his people, thus freeing them from the taint of demonic corruption that had plagued them for so long, vowing at the same time that no orc would be cast into slavery - by humans or demons alike - ever again. Thrall would go on to become Warchief of the Horde after Doomhammer fell in battle. Then, after leading the exodus to Kalimdor and fighting in the Battle of Mount Hyjal, Thrall and his people settled in the eastern Barrens, at last taking a land of their own for the first time since the corruption of Draenor. He named the new kingdom Durotar, in honor of his slain father. 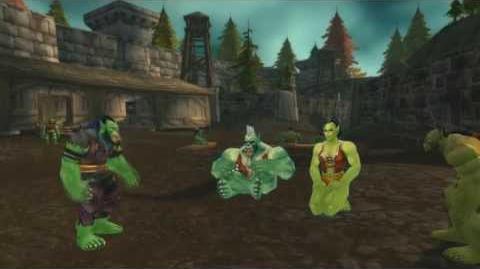 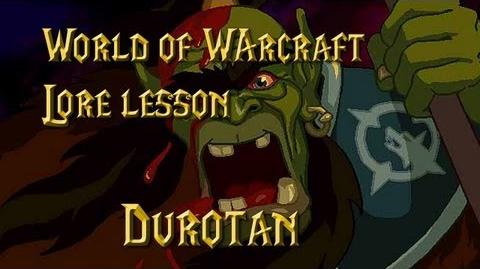 Retrieved from "https://wowwiki.fandom.com/wiki/Durotan?oldid=2855421"
Community content is available under CC-BY-SA unless otherwise noted.