"Looking For Group" and "LFG" redirect here. For the the meaning of the acronym lFG, see "LFG" in World of Warcraft terminology (A-M) under L

Dungeon Finder is the "Looking for Dungeon" (LFD) system Blizzard introduced in patch 3.3.0. It was made the default mode of the Dungeon Finder window and integrated with the Raid Finder and Scenario Finder in Patch 5.0.4. It is only used for 5-man dungeons, not raids or groups in general for high-level quests. The Dungeon Finder selects players to form a party from all servers in the battlegroup of the current realm, so there need not be a full group of players on one specific realm.

The first screen players see shows the role selection toggles and the type of dungeon desired. By default, the selection is for a random dungeon. This can be changed via the Type dropdown to such options as Random Lich King Heroic, Random Burning Crusade Dungeon, or Random Classic Dungeon. Running a random dungeon confers additional rewards in the form of emblems and gold.

Note that it is not possible to queue for dungeons outside of the player's level bracket or expansion level; e.g. level 80 players cannot queue for classic or Burning Crusade dungeons.

Selecting a specific dungeon or dungeons can be accomplished by choosing the very first option in the Type dropdown. The UI changes to show a list of dungeons, all of which are selected. To narrow the list, click the checkbox next to the category line to select/deselect all dungeons in that category. Players can also collapse categories of dungeons by clicking the +/- box just to the left of the category checkbox.

Queuing for a specific dungeon example

To tell the UI that you only wish to run Pit of Saron in 5-player Heroic mode:

Step 8: Wait in the queue

Step 10: Is everyone ready?

In Patch 4.1, a new sub-feature was added to offer roles that are lacking representation in the queue additional rewards for completing a random level 85 Heroic dungeon. Initially these rewards will probably be special mounts (like Reins of the Raven Lord, Swift White Hawkstrider, or Deathcharger's Reins) or non-combat pets (companions like Razzashi Hatchling, Cockatiel, or Tiny Sporebat).

So the tank left, or a healer disconnected, or a DPS got kicked. How does the party add a replacement member?

You can remove a player from the group via the Vote Kick System.

When you leave a group you got via the Dungeon Finder you will get the Deserter Debuff, preventing you from joining another random group for the next 30 Minutes. There are the following exceptions:

In addition to Dungeon Finder, everyone in capital cities automatically joins the LookingForGroup channel. It can be used to manually search for groups instead of, or in addition to, both Dungeon Finder and Looking For Raid.

Depending of the type of the dungeon, and on character's level, there are varying rewards:

The Daily item rewards depends on the Dungeon type:

The Daily money and XP rewards depends on the character level. The following table contains the rewards for each levels first random dungeon of the day, any other runs during the same day will yield approximately half the money and experience:

Classic dungeons vary widely in scope, from short romps to 4+ hour marathons. Many of the classic dungeons have been broken up into separate events to allow achievement of the dungeon finder rewards in a comparable amount of time.

All Burning Crusade Heroic-level instances have a level range of 70 to 75, and require the appropriate key to enter (except Magister's Terrace, which is unlocked at the end of a quest chain involving clearing the dungeon on normal difficulty). The keys are purchased from corresponding faction Quartermasters. All have the same completion criteria as the Normal-level instance.

Note that an optional third boss may be invoked in heroic Sethekk Halls, but not in the Normal version. This boss is not required to complete the instance.

A quest chain is required to unlock the Normal-mode Caverns of Time instances of The Escape from Durnholde and The Black Morass.

Wrath of the Lich King dungeons

All Wrath of the Lich King heroic instances require a minimum level of 80. The Nexus, Ahn'kahet: The Old Kingdom, Gundrak and Culling of Stratholme each have an optional heroic-only boss.

As of patch 4.0.6, players no longer need to discover the entrances to these dungeons to queue in Dungeon Finder.

In patch 4.1, two new dungeons were added, as refurbished, level 85 Heroic versions of old raid instances. These dungeons only have a Heroic mode and both require an item level of 346 to queue in Dungeon Finder.

At the launch of the game, there was only the LookingForGroup chat channel. This channel was available in all zones, but it was not a linked global channel. This was problematic since zones of the same level range are spread out throughout Eastern Kingdoms and Kalimdor. At this time, many players relied on their guild, friend's list, or even whisper to find groups. Otherwise, they would travel to Orgrimmar or Ironforge respectively, find a group, then travel back out to the site of the dungeon, making dungeons far away from these cities very unpopular. As a result, warlocks were also very popular at this time, as they played an important role in forming groups. Blizzard eventually added a queuing system related to the Meeting Stones in front of the instances, but it was rarely used, and was generally a failed feature. In Patch 1.9, the LookingForGroup channel became global, although it was restricted to the major cities. 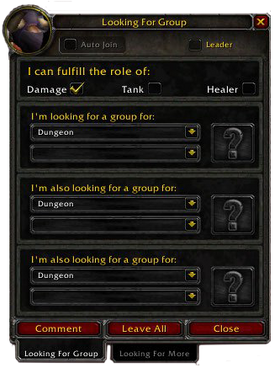 With the release of the Burning Crusade expansion and Patch 2.0.1 came the release of the new Looking For Group interface pane as well as the conversion of Meeting Stones from a queuing system to a summoning mechanism. At this time, the LookingForGroup channel was completely removed, since the interface was intended to replace it. Instead, players began to use the Trade channel for LFG, guild recruitment, and general global chat. Blizzard responded by hotfixing a rate limit of so many messages per minute. However, this was eventually lifted, and Trade channel continues to be a mixture of trade and other uses even today. After much community feedback, in Patch 2.1.0, the LookingForGroup channel was restored, although it was only available while actively using the Interface Tool.

In Patch 3.1.0, after the release of Wrath of the Lich King, the Looking For Group panel was improved to include the role which your currently logged character is able to fulfill (tank, damage, or healer), specify leadership, and identifying groups or individuals via the Looking for More pane.

First announced at BlizzCon 2009, Patch 3.3.0 saw a new cross-server Looking For Group (and Looking For Raid) system. This is the second cross-server feature Blizzard has added to the game, after Battlegrounds. Cross-server features are generally used to help users on low-population realms find groups, which was previously nearly impossible any time other than peak hours.

Replay.WaybackMachine.org New Interface Preview, Looking for Group (EU-version, as of Sep 26, 2010)
Retrieved from "https://wowwiki.fandom.com/wiki/Dungeon_Finder?oldid=2844106"
Community content is available under CC-BY-SA unless otherwise noted.