Duggan Wildhammer
"combat" is not in the list of possible values (Alliance, Horde, Neutral, Combat, Boss) for this property.

A Wildhammer dwarf from the Twilight Highlands, Duggan had recently been banished by his own clan for reasons unknown. Never to step foot on his land again, Duggan seemed to have met a rather unfortunate fate when he ventured up north to the Eastern Plaguelands which was infested by a plague that the undead Scourge had brought. While trying to seek a life in the land, he discovered crates of barley and foolishly made mead with it, which turned out to be plagued. 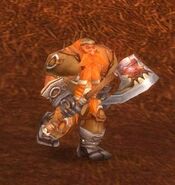 Previous model
Add a image to this gallery

Retrieved from "https://wowwiki.fandom.com/wiki/Duggan_Wildhammer?oldid=2798602"
Community content is available under CC-BY-SA unless otherwise noted.