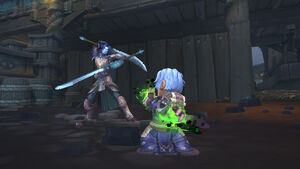 In Battle for Azeroth, players can take duels into the new outdoor arenas in either Boralus or Zuldazar. Similar to the Brawler's Guild, players can speak with an NPC who will queue them to take part in 1-on-1 duels in the arena. Once in the arena, they will battle it out against a rival player to see who continues on. If they lose, they're out. Getting far enough through the gauntlet of players will provide some achievements, including Master of Duels, which rewards the title Contender.

Players will also find the PvP reward chest in the Dueler’s Guild if they've filled up your Conquest bar for the week.

Players at level 120 who have War Mode enabled will be able to queue for a Dueler's Guild battle at the Bouncers (Alliance) or Troll Guards (Horde) in the War Headquarters for their faction, located in Boralus and Zuldazar respectively. Each headquarters is indicated on the map (M) with the Alliance symbol or the Horde symbol. Once queued, a buff will be placed on players showing their place in the queue.

Once queued, players can move around the area around the War Headquarters a little, but going too far risks queue placement. Players can observe duelists in action while they wait by speaking to

Players are able to buff (and get buffs) prior to duels; however, cooldowns will not refresh with each new opponent. After winning a match, players only have a short period of time before the next opponent. After defeating three opponents, players are removed from the dueling arena for the next contenders to take center stage.

Duelists will need to beat three opponents consecutively to earn the achievement Prize Fighter. Completing this achievement along with Dueling Master and Thirty Six and Two will award the achievement Master of Duels and the title of Contender.