Druid of the Flame

Druids of the Flame are night elven druids who have decided to turn from the traditional paths of druidic magic to follow Fandral Staghelm. Unlike their normal druid counterparts, they focus on flame-based magic, foregoing the healing magics that are the hallmark of druidism, bending nature to their will rather than working with it. As Fandral serves Ragnaros, so too do these druids.

Two of the most notable Druids of the Flame are Fandral Staghelm and the wife of his deceased son, Leyara. 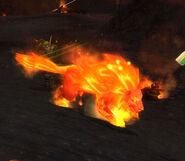 The Flame Cat form of a Druid of the Flame. 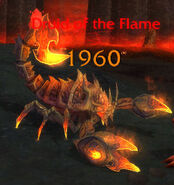 The Flame Scorpion form of a Druid of the Flame.
Add a image to this gallery

Retrieved from "https://wowwiki.fandom.com/wiki/Druid_of_the_Flame?oldid=2780161"
Community content is available under CC-BY-SA unless otherwise noted.