Drakuru is a drakkari troll who rises from being a prisoner at Granite Springs to being overlord of the Voltarus necropolis in Zul'Drak. The player interacts with him from when he is first encountered to when he is finally slain by the Lich King.

The wandering adventurer first encounters Drakuru when he is assigned to capture an ice troll for Samir at Granite Springs. Drakuru proposes a truce with the character, offering to share his knowledge of Drak'tharon Keep. Through the use of an alchemical potion, the character maintains contact with Drakuru, who guides him in a journey to collect several artifacts that make the keep impervious: The [Eye of the Prophets], the [Heart of the Ancients], and a set of [Drakkari Tablets].

The adventurer summons Drakuru at the top of Drak'tharon Keep, where he reveals that he was actually betraying the Drakkari Empire to the Lich King. Drakuru is awarded the Keep and the risen dead minions from it, and charged with 'cleansing' Zul'Drak. He offers the adventurer a position in Zul'Drak.

The adventurer later encounters Drakuru after narrowly dodging a trap laid by the Scourge. With the assistance of Stefan Vadu of the Knights of the Ebon Blade, the adventurer infiltrates the necropolis Voltarus and convinces Drakuru - now Overlord - to reveal his new weapons.

In a final showdown, the adventurer uses Drakuru's own Scepter of Domination to turn his Blightblood Trolls against him. On the verge of being defeated, Drakuru summons the Lich King for help. But instead of helping Drakuru, The Lich King beheads him for his failure, but spares the adventurer's life for having amused him.

Grizzly Hills (as a captive)

Through the Image of Drakuru produced by the Vial of Visions

Overlord Drakuru as a foe

As he appears in the Icecrown set of the TCG 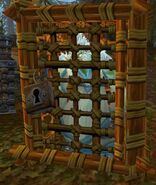 As he appears in Grizzly Hills

As he appears in Zul'Drak
Add a image to this gallery

Retrieved from "https://wowwiki.fandom.com/wiki/Drakuru?oldid=2799658"
Community content is available under CC-BY-SA unless otherwise noted.