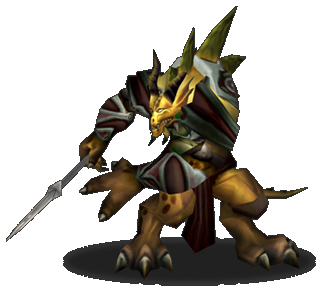 The drakonid in Blackrock Mountain appear to be the result of some of the black dragon Nefarian's experiments with the blood of different dragonkin, but the other places they are found in and other Dragonflights they are affiliated with may disprove this hypothesis. They are meant to be the footmen and standard soldiers of the Legion of Blackrock, and though they have considerable magic resistances, a flaw does exist; each Drakonid has a fatal weakness to one magic type, making it suffer enormous damage from that particular school. This weakness can be used to the advantage of any mortal army daring to step into the halls of Blackwing Lair in order to challenge the sinister Nefarian. Bronze colored drakonid can be found patrolling the Caverns of Time but are not hostile. Nether drakonid can also be found in Shadowmoon Valley, in the service of Illidan Stormrage, while the infinite dragonflight also employs drakonid of their own flight. Alexstrasza uses drakonid of all five primary dragonflights as the ground-based guardians of Wyrmrest Temple.

In Cataclysm, the Twilight' Hammer members in the Blackrock Caverns have been turned into Drakonid as a type of 'gift'. It seems that drakonid can be created by evolving dragonsworn. Given the various origins given, it is more likely that there are simply multiple ways of creating drakonid rather than this being the sole method of creation. They have been said to be half-man, half-dragon,[1] but this is likely a description and not to be taken literally. The Dragonmaw of Outland can also turn into Drakonid.[2] It is unknown how exactly they accomplish this, but it could be similar to how the Twilight's Hammer cultists achieve such a transformation.

When chasing an enemy, Drakonid twirl their polearms in a manner similar to that of the guardian of the Tkon Empire attacking Commander Riker in the Star Trek TNG episode "The Last Outpost." [1]

Retrieved from "https://wowwiki.fandom.com/wiki/Drakonid?oldid=2715764"
Community content is available under CC-BY-SA unless otherwise noted.