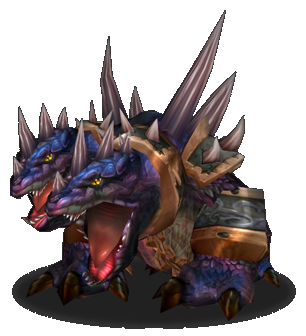 The drakeadon is a species of four-legged, two-headed lizard beasts. A notable example is Chromaggus, located in Blackwing Lair. More, smaller drakeadons can be found in Blackwing Descent. It seems that they have been created through experiments on the powerful Chromatic dragonflight. As such, they possess the power of all five Dragonflights, as showcased during the fight against Chromaggus who fights with all five of the Dragon's Breaths.

The name "drakeadon" is taken from the game files as no other name is known. Since Cataclysm, we can see that drakeadon is the true name of this species among the monsters in Blackwing Descent.

Retrieved from "https://wowwiki.fandom.com/wiki/Drakeadon?oldid=2806127"
Community content is available under CC-BY-SA unless otherwise noted.