Dragonmaw Port[75, 54] is the main quest hub and stronghold for the Horde in the Twilight Highlands. It is occupied by the Dragonmaw Clan. Befitting the orcish clan's title, the settlement is festooned with trophies from the dragons the orcs have killed, though the simple structures are replaced by imposing steel when the Horde take the port over.

The leader of the Dragonmaw at the port, Warchief Mor'ghor, returned from Outland with a small handful of fel orcs. He rules with a tyrannical hand, though his rule is questioned in secret by his subjects.

Horde players arrive by zeppelin from Azshara, aboard the Spear of Durotar, sailing beside Garrosh Hellscream's vessel amid the Horde air fleet. Upon spotting an undefended Alliance fleet sailing below, Garrosh sends the air support for the fleet against them, leaving the zeppelins unprotected. As if on cue, Deathwing and his twilight dragonflight attack, bringing many of the zeppelins crashing down amid balls of flame, and Horde players are forced to abandon ship while wondering what has become of their Warchief.

Negotiations break down with Mor'ghor, who kills several of the Horde negotiators before several of his subjects secretly ally themselves with the Horde. The Horde forces help arm the populace and lay siege to the port, all serving to distract from Horde players sneaking into the port to confront Mor'ghor a final time.

With Mor'ghor slain, the Dragonmaw eagerly join the Horde. Their entire settlement is transformed into a formidable fortress, complete with docks for the Horde naval ships and a zeppelin tower that transports passengers to the Krazzworks further north. A forge and an inn are among the new amenities. Once the portal to Orgrimmar is established, players are sent into the Highlands to deal with the Twilight's Hammer, Alliance, naga, and the twilight dragonflight.

Unlocked only after completing Return to the Highlands.

Unlocked only after completing Return to the Highlands.

Upon arriving during Twilight Skies.

After Return to the Highlands.

Dragonmaw Port as it first appears.

Revolt at the Port. 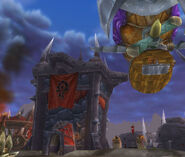 The zeppelin tower at the new Port.

The portal to Orgrimmar.

The forge and anvil near the water.
Add a image to this gallery

Retrieved from "https://wowwiki.fandom.com/wiki/Dragonmaw_Port?oldid=2540426"
Community content is available under CC-BY-SA unless otherwise noted.