The leaders of each group were called the Dragon Aspects, the Great Aspects, Aspects of Azeroth, or simply the Aspects.

Dragons group in five dragonflights that claim ancestry to the greatest of their kind. Each color is proud of its heritage and lineage, and remembers the name of all those who have gone before. These flights are further separated into small family groups known as broods. Each occupies and holds territory within Azeroth‘s less populated areas. Some are commonly seen; others have nearly been driven to extinction by wars among their own kind.The five great dragonflights are identified by their coloration: black, blue, bronze, green, and red.

Each of these five flights keeps secrets of its own and adheres to separate ideologies from the rest. They are led by powerful entities known as Aspects, one from each color, who rule over their flights as powerful gods looking down on their less fortunate descendants. For the most part, all dragons are of the same species with similar bone structure, anatomy, and physical capacity. Each flight, however, is distinct with different goals, interests, and ideals. The cautious traveler remembers the ancient words spoken by one of Azeroth‘s most powerful mages: Let sleeping dragons lie.[3] (MoM 27)

There were once many more dragonflights, but eventually five rose to prominence as the others declined (or presumably died out):

Other creatures and dragon types that have members within the primary and lesser dragonflights. 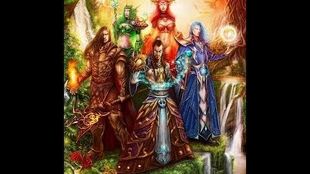 WoW Official Game Site (US) The History of Warcraft → Chapter I: Mythos → Charge of the Dragonflights by Blizzard Entertainment

WoW Official Game Site (EU) The History of Warcraft → Chapter I: Mythos → Charge of the Dragonflights by Blizzard Entertainment
Retrieved from "https://wowwiki.fandom.com/wiki/Dragonflight?oldid=2855186"
Community content is available under CC-BY-SA unless otherwise noted.