The Shores of Northrend
Frostmourne

Chapter 8 of the Warcraft III human campaign, The Scourge of Lordaeron.

While Arthas and Muradin Bronzebeard are out on an errand, an emissary of Lordaeron arrives at their encampment and brings news to Captain Valonforth. Upon Uther Lightbringer's request, Arthas' troops are to be recalled back to Lordaeron, with ships available at the shores beyond a long, twisted path full of undead. Valonforth decides instead to cut their way through a forest which leads to the ships. When Arthas and Muradin return to the encampment, Arthas asks Valonforth why nobody is at their post. The captain informs Arthas of the recall, which infuriates him. Arthas tells Muradin that the ships must be burned in order for his troops to remain in Northrend. Muradin questions his choice, but reluctantly aids Arthas in the process. In order to fight through the undead, Arthas and Muradin hire various mercenaries including trolls and ogres. Once all of the ships have been destroyed, the troops back at the encampment are surprised to see Arthas, Muradin, and the mercenaries, but no ships. Arthas quickly blames his mercenaries for the destruction of the ships, and the troops kill them. Arthas proceeds to tell his troops that there is no way home and will continue the mission to hunt down Mal'Ganis. 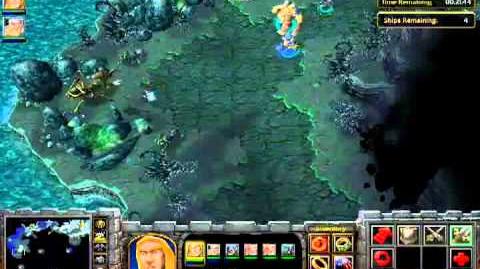 Warcraft 3 Gameplay - Human Part 8 - Dissension
Add a image to this gallery
Retrieved from "https://wowwiki.fandom.com/wiki/Dissension?oldid=2858046"
Community content is available under CC-BY-SA unless otherwise noted.