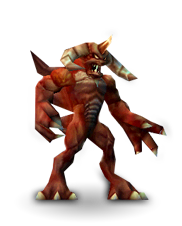 Diablo Stone summons and dismisses Mini Diablo, a devil companion that follows you around, meaning it is a non-combat pet and will not aid you in battle. It can, however, be used in Pet Battles.

This item is available only to people who bought the Collector's Edition of World of Warcraft. All characters on a CE account will have all three pets mailed to them automatically.

Prior to it being automatically mailed, players obtained this pet by opening their gift box item (that they received in the mail) and accepting the quest Welcome! which required them to turn in the gift item to an NPC in exchange for a choice of three pet items, one of which was the Zergling Leash. The name of the gift box, NPC, and quest zone was different depending on the player's chosen race.

Mini Diablo is inspired by the title villain of Blizzard's Diablo series of games (the name is literal; it's a very tiny version of the Lord of Terror). As its idle animation, it will occasionally breathe fire.

WarcraftPets
Retrieved from "https://wowwiki.fandom.com/wiki/Diablo_Stone?oldid=2775184"
Community content is available under CC-BY-SA unless otherwise noted.