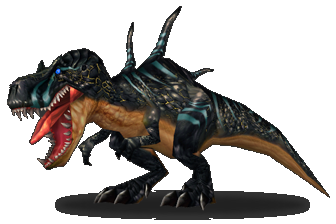 Devilsaurs are huge, Tyrannosauridae theropod dinosaurs found in small numbers only in Un'Goro Crater, Eco-Dome Farfield in Netherstorm, Drak'Tharon Keep and Sholazar Basin. They are one of the most recognizable and unique creatures found in the World of Warcraft.

This giant bird-like reptilian beast walks on two powerfully muscled hind legs. Two stunted, taloned forelimbs stretch out before it, and rows of bloodstained teeth fill its maw. The devilsaur takes its name from its vicious, relentless attacks, during which it utterly savages its victims to death. The devilsaur uses its bite to assault its prey, and its powerful hind legs and sheer size allow it to chase down almost any chosen prey. Despite the ferocity of this ill-tempered beast, hunters prize its extraordinarily tough but supple hide and often seek it out. Devilsaurs can grow to heights exceeding thirty feet and can weigh almost sixteen tons. Females tend to be smaller and lighter than males, but are even more aggressive.

In a reversal of most creatures’ natural gender roles, a female devilsaur abandons her eggs as soon as she lays them; male devilsaurs can identify a clutch of eggs they've fathered by scent, and will protect that clutch until the eggs hatch. The devilsaur uses its intimidating speed to charge prey as soon as they are within range. It typically targets the smallest creatures in a pack first, closing its powerful jaws over them and lifting them off the ground. The devilsaur mauls its prey, biting and shaking until it or the enemy stops moving, swallows, and then moves on to the next target. Badly wounded devilsaurs have been known to flee, sometimes carrying opponents with them.[1] (MG 26)

All the devilsaurs in Un'Goro are elite and range from level 54-60, the largest being King Mosh. All members of the devilsaur family are a deadly threat to the unlucky person they come across. They can be skinned for Devilsaur Leather, used in the popular Devilsaur Set Tribal Leather Armor. (see Devilsaur Armor)

With the release of patch 3.0.2, Devilsaurs have become tamable as Hunter pets.

Devilsaurs are extremely popular pets, mostly due to their Tyrannosaurus Rex likeness and looks. They are exotic beasts and can only be tamed by beast mastery hunters with the [Exotic Beasts] ability.

Though hunters can respec their pet devilsaurs into Cunning or Tenacity, they are inherently Ferocity. In addition to the abilities that come standard with all pets ([Growl] and [Avoidance]) and those given to their natural or retrained specialization, all devilsaurs are given the following:

The devilsaur was also used as the forum MVPs posting avatars prior to the launch of Wrath of the Lich King.

See this subject on the Hearthstone wiki: Devilsaur (UG)

Retrieved from "https://wowwiki.fandom.com/wiki/Devilsaur?oldid=2829102"
Community content is available under CC-BY-SA unless otherwise noted.