In Desolace, the skulls of ancient kodo beasts stare soullessly from their graves, halfway buried in dust. The husks of long-dead trees jutting in gruesome angles from the gray ash are the only twisted remains of a verdant past.

This dour setting is violently jarred by the thunder of thousands of hooves and the clamor of armor and weaponry as the four tribes of vicious centaur wage war on all who enter their domains, but most notably on one another. Desolace is the home of the centaur. It was among the twisting cliffs of the western canyons that their race was born from the foul womb of Maraudon.

Proud, but sorrowful ruins of stone attest to the one-time glory of the Highborne night elves. Blasted in the depths of time by the shock waves of the Great Sundering, the ruins are inhabited now by all manner of foul creatures.

Desolace today is a battleground for many of the opposing factions represented here. Apart from the tension between the Horde and the Alliance, at Shadowprey Village and Nijel's Point respectively, the Kolkar, the Gelkis, the Magram, and the Maraudine centaurs fight as much against each other as they do against the orcs and the humans.

Demons, satyrs and Undead successfully summoned by the Burning Blade present a major challenge for both the Horde and the Alliance, and portals to demonic plains are constantly being opened. The naga presence to the northwest coast is also steadily becoming a source of pressing concern. Unless steps are taken, Desolace risks becoming a demonic stronghold, regardless of the introduction of fresh water and the recent creation of the Cenarion Wildlands.

Legends claim that the centaur are descendants of a dark union between one of the demigod Cenarius's sons and a princess of the chaotic earth elementals. When the first khans were born of their union, it is said that they murdered their father, for shame of their misshapen appearance. They were born filled with rage and savagery and have not calmed in the centuries that followed. The first of their kind, the first khans, gave rise to the five tribes of the centaur. The race swept across Desolace and soon became legendary for its brutality. The diligent night elves held them in check for ages until the Burning Legion rained its destruction upon the world. The night elves left the centaur out of necessity for their own survival during the wars, allowing the twisted race to assume control of Desolace. Though fortunate enough not to be scorched into oblivion in the demon wars, Desolace was savaged nonetheless due to the centaur's ceaseless aggression. No longer threatened by night elves, the tribes plagued other plains races - chiefly, the peaceful tauren. This struggle endured for generations until recently, when the tauren were at last driven from Desolace. The centaur were never content with controlling just Desolace and have followed their tribal khans in a series of clashes with other races throughout southern and central Kalimdor.

The mountainous barriers of the Stonetalons lie to the north and Thousand Needles to the southeast, isolating Desolace from much of the rest of Kalimdor. The grasslands and mesas of Mulgore stand directly east, and the land runs rugged and open to the storm-tossed coast to the west. The winds create waterspouts against the lowland hills along the shore. The western coastline of Desolace is lush in sad contrast to the wasteland of its interior. Desolace is a gray, rocky wasteland littered with bones. It seems almost under a supernatural curse, its skies always black and stormy, with lightning and high winds a constant throughout the realm. The surrounding mountains form a significant barrier to travel, a key reason why the centaur have never established more than a sporadic presence elsewhere on Kalimdor. Five barbarous centaur tribes dominate the entire region with the strength of overwhelming numbers and unequaled ferocity. Each tribe is led by one of the dreaded khans and is known by a distinctive tribal color - Black, Brown, Green, Red, and Yellow. Members use the color to mark their weapons and their faces. The khans who lead each tribe rarely have contact with each other except in times of war. There are no other cultures of any note in all of Desolace, for the centaur have run them all down in their unceasing lust for conquest. The only animals that can sustain themselves in the arid and violent land were beasts such as lions, raptors, sand serpents, and harpies.[1]

In recent times Horde, Alliance, the Burning Blade, the Cenarion Circle, Satyr and Naga have set up outposts in the desolate land, and only four of the five tribes control Desolace. With the centaur kept in check, more species of animals occupy the land than before.

Alliance:From Stonetalon Peak in the Stonetalon Mountains, head southwest through the Charred Vale. There is a pass at the southern border of the vale leading into Desolace. Nijel's Point can be found in the northern mountains, east of the pass.

Horde:From Sun Rock Retreat, go up the trail west into the Charred Vale, then south into Desolace. The Horde flight path is in Furien's Post located in the northwestern area of the map.

Desolace is a gray, rocky wasteland littered with bones. It seems almost under a supernatural curse, its skies always black and stormy, with lightning and high winds a constant within the interior.[2] Pools of yellow, polluted water cover the landscape.

The mountainous barriers of the Stonetalon Mountains lie to the north and Feralas to the south and southeast[2], isolating Desolace from much of the rest of Kalimdor. The grasslands and mesas of Mulgore stand directly east, and the land runs rugged and open to the storm-tossed coast to the west. The winds create waterspouts against the lowland hills along the shore. The western coastline of Desolace is lush in sad contrast to the wasteland of its interior[2], with the airy inn of Shadowprey Village allowing travelers to wake up to a beautiful view of the waterline.

Central to any study of the geography of Desolace are the four centaur tribes. The smallest and least influential of these is the Kolkar whose ancestral grounds lie along the eastern mountains. Not far south of the Kolkar are the Magram tribe whose yurts and pavilions are haphazardly scattered among acrid pools of brackish water near the juncture of the eastern and southern ranges. Just west of the road leading from Feralas, not far from the coast are the Gelkis. The Gelkis centuar inhabit a large ravine and surrounding environs. A cave entrance in the rocky cliff face can only be accessed by crossing a treacherous rope bridge and houses the Gelkis leadership. Finally, the Maraudine tribe inhabit the canyons and cliffs pinched between the coast of the Veiled Sea to the west and the Kodo Graveyard to the east. The entrance to dreaded Maraudon lies in the heart of Maraudine territory.

As the goblins of the Venture Co. know, it is often the most dire situations and environments which present the richest opportunities, and so there are a few neutral quests they offer for those willing to do some legwork for them. Hunting in Desolace is both challenging and profitable, with potential prey including kodo, thunder lizards, elementals, basilisks and powerful scorpids and vultures. Those brave or foolhardy enough who seek an even greater challenge can also hunt giants and the various otherworldly monsters which inhabit the demon-infested Mannoroc Coven.

The surrounding mountains form a significant barrier to travel, a key reason why the centaur have never established more than a sporadic presence elsewhere on Kalimdor.[2]

The centaur-inhabited Maraudon is a 5-man instance located in this zone. No other dungeons, micro dungeons, or battlegrounds can be found here.

Desolace is home to several characters of note. At Ghost Walker Post, Maurin Bonesplitter and Takata Steelblade seek aid in the battle against the Burning Blade. In Shadowprey Village, Taiga Wisemane attempts to cleanse the demonic taint that the Burning Legion has brought with it. And at Nijel's Point, Kreldig Ungor sends bold adventurers to the wide corners of the land in search of mystical items and treasure. In addition, Rexxar used to wander these lands with his bear companion Misha until the Dark Portal reopened.

In addition to the centaur, Burning Blade cultists maintain an extensive presence in Desolace, with their outposts of Thunder Axe Fortress, Shadowbreak Ravine and Mannoroc Coven. There is also an extensive demonic infestation, particularly in the areas of Mannoroc Coven and Sargeron.

Both the Alliance and the Horde have started occupying Desolace, with the Horde constructing two notable settlements: the Darkspear trolls established Shadowprey Village on the western coast and the tauren have established Ghost Walker Post on the hills above the Kodo Graveyard. An Alliance town has been built at Nijel's Point among the night elven ruins, deep within the mountain ridge to the north that separates Desolace from the Stonetalon Mountains region.

The relative success of the Horde's expansion into Desolace has raised a number of concerns throughout the political elites of both Kalimdor and Azeroth, but particularly among the Alliance. These concerns stem mainly from the fact that the Horde's colonization appears to be proceeding seemingly unhindered by the extensive presence of the Burning Blade cult. Allegations have emerged that the Horde has forged an agreement of sorts with the cultists. Determined to dispel these allegations and demonstrate to the Alliance that the Horde no longer consorts with demons, Warchief Thrall has commanded Keldran in Orgrimmar to take any steps necessary to remove the Burning Blade from the region.

In the expansion World of Warcraft: Cataclysm, the destruction of other lands allowed fresh water to flow into Desolace, turning parts of it into lush prairie. However it maintains a reputation for being a wasteland of bones and ashes thanks to the constant battling of the four centuar tribes, and more worryingly the demon-infested Mannoroc Coven to the south.

Questing in Desolace usually takes place between levels 30-40. Some notable quests in the area include a series of quests to befriend one of the centaur clans, accomplished first by killing their enemies and then by performing quests for them.

There'll be water too

Desolace in Cataclysm
Add a image to this gallery 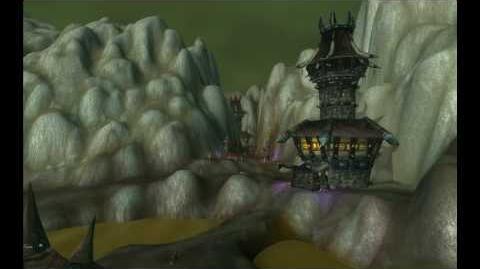 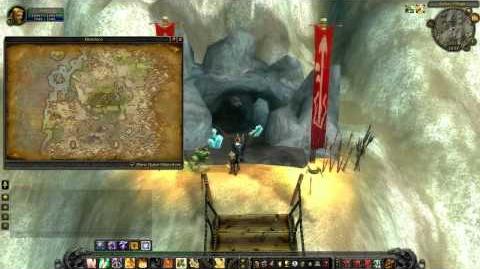 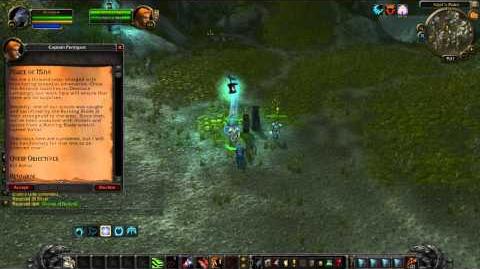 Retrieved from "https://wowwiki.fandom.com/wiki/Desolace?oldid=2840574"
Community content is available under CC-BY-SA unless otherwise noted.