This article is about the hero class in World of Warcraft: Wrath of the Lich King. For other uses, see Death Knight (disambiguation).

Death Knight talents are split into 3 categories, each of which is fully capable of supporting either a tanking or DPS role:

Death Knight is the name of a class shared by several organizations of powerful necromancers. These orders share a few things in common, including riding horses with horned skulls for heads and many of the same abilities.

The death knights of the Second War were powerful undead necromancers created by Gul'dan to replace the warlocks slaughtered by Orgrim Doomhammer. The first and most prominent of the death knights was Teron Gorefiend.

A new order of death knights emerged during the Third War, in service to the Lich King. They were created from living and undead humans (and occasionally other races) who had been granted unholy runeblades, and most were former paladins who had forsaken the Holy Light.

Orgrim Doomhammer's first act as warchief of the Horde was to crush the orc warlocks of the Shadow Council. He grudgingly spared the council's former master, Gul'dan, in exchange for the warlock's servitude; in turn Gul'dan promised to create a host of powerful new warriors to serve the Horde. After experimenting at length with the souls of the recently slain council members, Gul'dan successfully instilled the spirit of the necrolyte Teron Gorefiend into the corpse of a fallen knight of Stormwind. Thus, the first terrifying death knight was born. Gul'dan transformed his other council members as well, creating a vast legion of unholy warriors whom sowed chaos and fear throughout the land of Azeroth during the Second War.

Following Gul'dan's desertion and death, part of the Horde, including the death knights, retreated through the Dark Portal to Draenor. Most of the surviving death knights disappeared after Draenor's destruction, with the exception of Teron Gorefiend, whose restless and embittered form resides now in the Black Temple of Outland.

Many of Ner'zhul's original Death Knights were transformed into Liches by the Burning Legion when they were given a second chance to serve the Demon Lord, Kil'jaeden.[4] (W3Man #?)

Champions of the Lich King

Years after the destruction of Draenor, the immensely powerful Lich King created a new breed of death knights: malevolent, rune-wielding warriors of the Scourge. The first and greatest of these was Prince Arthas Menethil, once a mighty paladin of the Silver Hand, who sacrificed his soul to claim the runeblade Frostmourne in a desperate bid to save his people.

Unlike Gul'dan's death knights, modern death knights are former heros who pledged their souls to the Lich King in exchange for the promise of immortality. Death knights who fall in battle are soon raised again to continue in their master's service.

In the years since Arthas shattered the Frozen Throne and merged with the Lich King, the power and fury of the death knights has only grown. Now these unrelenting crusaders of the damned eagerly await the Lich King's command to unleash their fury on Azeroth once again.[5]

A first-generation Death Knight is essentially the soul, knowledge, memory, and personality of an orc necrolyte or warlock, necromantically bound within the reanimated corpse of a human being. Unlike the Lich King's Death Knights, these entities retain free will and thus possess the ability to advance their own personal agendas as they please. The corpse may be skeletal or still contain flesh.

Many of these death knights were later transformed into Scourge liches, and acted as Scourge spellcasting hero-class units in Warcraft III: Reign of Chaos.

Due to the ambiguous choice of words by Blizzard when they wrote their original lore, it is perfectly reasonable to assume that there may be several first generation Death Knights who still exist in their original form. Blizzard has recently unveiled the whereabouts of one such original Death Knight, Teron Gorefiend, a malevolent abomination whose restless and embittered form now resides in the Black Temple of Outland. Others are rumored to be connected to Karazhan as well.

A second generation Death Knight is essentially the immortalized body, soul, knowledge, memory, and personality the hero who pledged their soul to the Lich King. However, these heroes may no longer possess free will and may serve their master for eternity. Though many of these death knights aren't too different from other Scourge minions in that they are reanimated from corpses and forced to serve the Lich King unquestioningly (as is the case with player-created Death Knights), some may even choose to become death knights under their own free will while still alive (Baron Rivendare is an example of this).

In the upcoming Wrath of the Lich King expansion, player-created Death Knights can revolt against the Lich King and ally themselves with their former factions. A player's free will is restored to them during a Death-Knight-specific quest event involving an epic battle against the legendary paladin, Tirion Fordring, the cleansed Ashbringer, and the forces of the Argent Dawn.

At this time, the criterion for creating a Death Knight will be the existence of a level 55+ character[6] on the player's account. Once that criterion is met, the player can create one Death Knight per realm.[7]

The Death Knight combines martial prowess with dark, necromantic energies. Players might be familiar with the death knight from previously released Warcraft games -- most recently, in the campaigns for Warcraft III: Reign of Chaos and the Warcraft III: The Frozen Throne expansion, the former paladin Arthas became a death knight and wrought havoc across Azeroth before fusing with the spirit of Ner'zhul to become the Lich King. It is important to note that these particular Death Knights are based upon those created by the Lich King in Warcraft III, not those of Orcish origin as seen in WarCraft II.

The Death Knight is the first hero class in World of Warcraft. This is a separate character from other characters and can be created as soon as one of your existing characters on a given server reaches level 55. After making a Death Knight, you will not lose access to any of your existing characters. The Death Knight will start at level 55 in Acherus: The Ebon Hold over the Eastern Plaguelands, with multiple spells and abilities ready to use, and a set of uncommon gear. When you leave Ebon Hold, you will have a full set of rare gear ready for Outland. Through the Death-Knight-specific quests in this necropolis and the surrounding areas, the character learns to master the power of the Death Knight and learns to use this new power for the will of the Lich King. Quests will take them outside the necropolis and into an area within the Scarlet Enclave.

Players will be able to create one Death Knight per server as long as they have at least one character that is level 55 or higher on that server. There are no racial limitations for creating your Death Knight, but PvP servers are still limited by faction (i.e., if you have an Alliance character on a PvP server, you cannot make a Horde Death Knight on that PvP server).

The Death Knight uses a unique rune-based resource system to govern his spells and abilities. There are three rune types: blood, frost, and unholy; each with an attached color and symbol. As they use their abilities, the runes will be exhausted. After a period of time (10 seconds) the runes will refresh.[8] The Death Knight will be able to use spells to turn a rune into a Death Rune, which can be used as a Blood/Frost/Unholy rune. In addition, whenever the Death Knight uses a rune ability against a foe, it will build up a certain amount of Runic Power. This Runic Power is only used by few abilities.[9] Certain abilities (such as Dancing Rune Blade) will completely drain all the Runic Power that has been accumulated. The more power stored, the more effective the ability. Most abilities that use Runic Power use a set amount, like Death Coil.

Death Knights will not be able to reallocate the number and type of runes - they're fixed to 2 runes of each type.[10] Runeforging will still be available, but it will only provide permanent weapon enchants. The enchants work just like the permanent weapon enchants provided by Enchanting, but are self-only and are supposed to be better for the Death Knight than the Enchanting ones.

The original player frame for Death Knights shown at BlizzCon has changed as feedback showed it was not ideal for displaying rune power for players.

In general, the Death Knight can be considered a hybrid class that combines damage dealing and tanking. They will wear plate armor, and be able to dual-wield or use two-handed blade weapons (and maces, as revealed recently)[8]. Like Druids, they will tank without shields. Their tanking mechanics will most likely be high armor as indicated by Frost Presence, and by having a high chance to parry.[11][12] Blizzard has said that their tanking niche will be caster-type enemies.[13] A common assumption among fans is that Hero Classes will be overpowered, however Blizzard has stated on announcing the Death Knight that they will be of similar strength and value to existing classes. Like other classes they will have their own unique abilities, a few of which can be seen at the Death Knight abilities article.

Runeforging allows the death knight to permanently enchant their weapon, and thus overwrites any weapon enchants from Enchanting. A player will have to be near a runeforge in able to forge a rune onto their weapon. 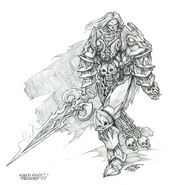 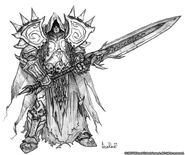 Death Knight art by Raneman
Add a image to this gallery

DeathKnight.info A forum for discussing the Death Knight

DeathKnightBuilds A listing of different talent specs for Death Knights.

Retrieved from "https://wowwiki.fandom.com/wiki/Death_Knight?oldid=1668777"
Community content is available under CC-BY-SA unless otherwise noted.