Day of the Dead

Day of the Dead is a world event that made its debut in 2009. It occurs immediately after Hallow's End, and at the same time as the real-world Day of the Dead, on November 1st through the 2nd.

During the Day of the Dead, the people of Azeroth gather in graveyards to celebrate and cherish the spirits of those they have lost. One can find the festivities in the cemeteries of any major city where celebrants cook, drink, don costumes and more.

Can you feel it? The spirit world draws close during the Day of the Dead. This is why we decorate the graves of our dearly departed with flowers and candles and offerings: to welcome them back, even if only for a time.[3]

It is possible to become a skeleton by dancing with Catrina during this event, granting the achievement

Dead Man's Party and the cosmetic [Honor the Dead] buff. Players can also earn three additional achievements when they defeat one, 20 and 50 contenders while wearing a Contender's Outfit, purchased during the event's festivities.

In the graveyard of your character's home city, (e.g. Darnassus for the night elves) or in the neutral capital cities of Shattrath City and Dalaran, a pet skeleton with a Sombrero on, the [Macabre Marionette] is available as a reward for completing The Grateful Dead. Do this by buying the [recipe] for [Bread of the Dead] and an [Orange Marigold] or a [Bouquet of Orange Marigolds], creating the bread at the Ghostly Fire next to Chapman, and using the marigolds to see the Cheerful Spirit quest giver. The ghosts can also be seen with a Warlock's Detect Invisibility (NOTE: Spell removed with Cataclysm pre-expansion patch, 7-Dec-2010) or items with similar effect.

These items can be transmogged only during the holiday! 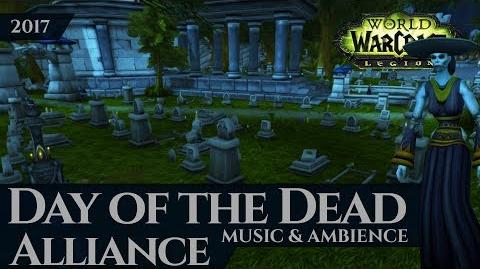 Day of the Dead Alliance - Music & Ambience (2017, 4K, World of Warcraft Legion)
Add a image to this gallery

WoW Official Game Site (US) Day of the Dead

WoW Official Game Site (US) The Day of the Dead has Arrived by Blizzard Entertainment, Nov 1, 2013 9:00 AM PDT

Web.Archive.org Day of the Dead archive page (from old official US site) 7-Nov-2010

Retrieved from "https://wowwiki.fandom.com/wiki/Day_of_the_Dead?oldid=2854683"
Community content is available under CC-BY-SA unless otherwise noted.