For the newest version of the Faire, see Darkmoon Faire.

The Darkmoon Faire showcases the weird and the extraordinary. Gathering the exotic from around the world, Silas Darkmoon presents the Darkmoon Faire as a celebration of the wonders and mysteries found in Azeroth. While the Faire spends most of its time in parts unknown, they do stop from time to time in Mulgore, Elwynn Forest, and Terokkar Forest.

The Darkmoon Faire is an event that appears in the game. The location of the Faire rotates monthly among three locations:

Setup takes the carnies three days; and the Faire opens early that Monday, and remains there for one week. Heralds in Ironforge and Orgrimmar announce the arrival of the Faire.

The Faire itself is neutral and can be visited by players of either faction regardless of the location. Naturally, on PvP servers, you will be flagged and subject to enemy player attack while it is in the other faction's area. On PvE servers, Alliance guards in Goldshire can aggro on Horde players, especially in the north part of the Faire (the Faire in Mulgore has no Horde guards nearby).

To celebrate the 2007 BlizzCon event on August 3 and 4, The Tauren Chieftains (aka Level 70 Elite Tauren Chieftain) made a guest appearance at the new Darkmoon Faire location outside of Shattrath city. At the top of every hour for the duration of BlizzCon, they performed Power of the Horde on a special stage set up for the occasion. http://blue.cardplace.com/newcache/us/676238677.htm

The concerts still occurred up to August 12 but after the Faire moved away the concerts did not return. It was likely only for the debut of the Shattrath location, and that the band would be making regular appearances at World's End Tavern in Shattrath from then on.

Vendors and other NPCs

The Faire has some vendors and some special NPCs.

See Darkmoon Faire Prize review for a subjective evaluation of the prizes.

Gelvas Grimegate sells the following items in exchange for your tickets:

You will not be offered prizes that are above your level.

The primary way to earn Darkmoon Faire Prize Tickets is to provide Darkmoon Faire NPCs with requested items in exchange for tickets. You earn tickets by turning in animal parts or some trade-skill goods (see list following). These are repeatable quests, but will only be available to you depending on your level, and as your reputation with Darkmoon Faire increases, easier turn-ins are no longer offered. Each turn-in gives 250 rep with Darkmoon Faire (275 for human characters, with their 10% rep bonus). This means that every turn-in consumes a limited number of turn-in slots (for all except the top level turn-in, which does not cut off). To maximize the value of your turn-ins and so you are not stuck with items you can no longer turn in for tickets, note when each item turn-in cuts off.

You can turn in quest items produced by a profession even if you do not have that profession; this is a change from past WoW versions. There are only turn-in quests for blacksmithing, engineering, and leatherworking items, but there are also farmable animal part turn-ins. Each kind of turn-in, by profession or animal parts, is offered by a different Darkmoon Faire NPC. Look around the Faire for the one you want; they are easy to find.

The following list shows the animal parts turn-in, then the blacksmithing, engineering, and leatherworking turn-ins as a series of tiers arranged by availability and cutoff. For each of the following tiers, you may turn in any set of the listed items as a single turn-in transaction. Each tier also lists the number of Darkmoon Faire (DMF) tickets given as a reward, the required character level, the reputation cap, and the total number of possible turn-ins, and the possible number of turn-ins if you have already completed the earlier tiers, for normal reputation gain (and for humans with a 10% rep bonus).

Yields 20 DMF Ticket, requires level 40, unlimited.
You can do any number of these tier 5 turn-ins.
Per turn-in:

You will be offered all of the quests in a tier, if the tier is available to you. Each turn-in is independent. You can mix and match turn-ins until you reach the rep limits.

The highest level quests (tier 5) remain available, although they are implemented as two sets of quests, one set that gives reputation that does cut off and is replaced by another set that does not give reputation and does not cut off.

Since the number of turn-ins is limited, if you want to earn as many tickets as possible, do the highest tier available to you, and since Tier 5 is unlimited, do it last. Even consider holding off doing low-value turn-ins and save the turn-in slot for better turn-ins. In particular, consider skipping the tier 1 quests, which yield only one ticket each.

Both the item turn-ins to earn tickets and the ticket turn-ins to purchase prizes are implemented as quests. So, although the Darkmoon Faire Ticket works kind of like currency, and the ticket turn-in NPC works kind of like a vendor, quest completion changes happen in a dialog box when you turn in items in exchange for tickets or purchase prizes with tickets. For instance, each time you transact, the dialog closes, so, unlike a vendor, where you can purchase a stack of something just by clicking on the item, the Darkmoon Faire Ticket turn-ins require a separate dialog with the NPC for each turn-in. Also, to do a turn-in to earn tickets or use tickets for a purchase, you need an open slot in your quest log to accept (and then complete) the quest.

See the item article, Darkmoon Faire Prize Ticket, for a full list of ticket-earning quests and ticket purchase quest; the same transactions as are listed above, in quest format.

Refer to Darkmoon Cards for a complete list of the rewards, and the sources of the cards. 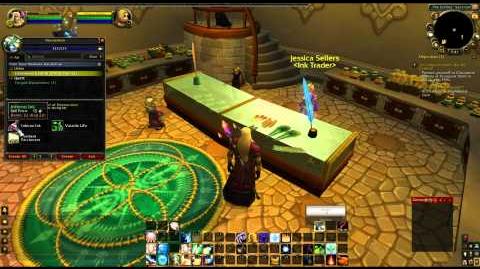 If you go to the fortune-seeking Gnoll, Sayge, he will tell you your fortune by giving you a strong buff and a small note. You can receive a new buff only after at least two hours and if your buff has run out.

The buff he gives you depends on what you answer to his questions. See the guide to Answering Sayge.

Refer to the section Earning tickets above for detailed information on item turn-in quests. Each turn-in increases Darkmoon Faire reputation by 250, (275 for human characters, due to 10% reputation bonus). As your reputation increases, certain turn-in quests will become unavailable and you must rely on more difficult ones. Once your reputation passes a certain number, you can no longer turn in those items.

The table shows how many turn-ins you can do for each tier; keep in mind that the Rep displayed is after the turn-in.

*This becomes 5032 if you did the Herald quest before reaching the 5000 reputation mark.

Upon reaching 2250 reputation into Friendly (5250 total rep), turn-ins will no longer provide reputation gains. All turn-in quests will be replaced by "More" versions; for example,

[40] Thorium Widget will be replaced with

The simplest method of increasing your reputation beyond this point is by turning in decks of Darkmoon Cards. Lesser decks, which can be assembled from cards made by Scribes, award 25 reputation each. These may be turned in at any time, even if the Darkmoon Faire is not running. Major decks, which are assembled from cards made by Scribes or found as loot, award 350 reputation; they may only be turned in when the Darkmoon Faire is running.

If you haven't already completed them, the quests

[6] The Darkmoon Faire (Alliance) and

[6] The Darkmoon Faire (Horde) will both give you a further 75 reputation above 2000 Friendly, but are not repeatable. Both versions are available to any race of both factions, and are not mutually exclusive, although it will be difficult for an Alliance member to get the Horde quest, and vice versa.

A final method of gaining reputation above 2000 Friendly is completing any of the four versions of the quest entitled Your Fortune Awaits You.... Four of the possible twenty-nine fortunes offered by Sayge at the Darkmoon Faire start this quest. They have players seek a chest in The Deadmines, The Wailing Caverns, Palemane Rock, or Eastvale Logging Camp. These quests reward 75 reputation each, (as well as the contents of the chest) and they can be repeated, provided you are able to get the fortune again. Because of the long cooldown on Sayge's fortunes and the approximate 14% chance to get one of these fortunes, increasing your reputation this way is very slow work.

There is no known benefit from Darkmoon Faire reputation beyond the discount on the food, drink, special items, and the already cheap beer; although at the reputation level at which turn-ins stop giving reputation, Silas Darkmoon hints at rewards for those who continue to earn reputation.

Insane in the Membrane

Exalted reputation with Darkmoon is one of the requirements for the

[Insane in The Membrane] Feat of Strength. An extensive guide on this achievement,[2] has a section on reaching Exalted with Darkmoon Faire.

Your Fortune Awaits (US) Archive page is messed up