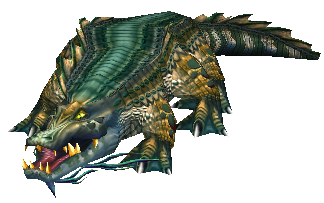 A crocolisk is a long-snouted reptile with six short legs and a long tail that bears a striking resemblance to basilisks, alligators, and crocodiles.

It is massive in length and covered in thick, rough scales that run from the end of its tail to the tip of its maw. Mottled green in color with yellowish fangs, the beast is supported by six squat legs with webbed feet, each of which ends in short, black claws.

Crocolisks are powerful amphibious predators common in most regions of Azeroth, attacking unwary adventurers sailing their waterways. They exist naturally in both fresh and saltwater environments, preferring to remain close to land. However, seafarers occasionally report sighting giant crocolisks out in the ocean, miles from dry land. Crocolisks spend most of their time submerged, but are equally at home on land and often climb onto shore to sun themselves or to roll in warm mud.[citation needed]

They are proficient swimmers, able to surge forward with bursts of speed that often catch prey by surprise. They prefer to feed on relatively defenseless prey, such as small, aquatic creatures or larger land creatures that flounder when crossing bodies of water. However, crocolisks never hesitate to defend their territory aggressively from trespassers. A crocolisk usually lies in wait, submerged near the edge of a body of water with only its eyes and nostrils showing, unnoticed as long as it remains motionless When it spots prey, it charges to the attack. It lacerates the victim until it bleeds to death, then drags the corpse back to its watery home. Crocolisks become stealthy while they are in the water.[1] (LoC 189) [2] (MGWS 8)

Crocolisks are usually found near bodies of water such as rivers, marshes and lakes. They appear to be related to the primitive diemetradons.[citation needed]

They are found in the Wailing Caverns, Durotar, Loch Modan, the Wetlands, Swamp of Sorrows, Dustwallow Marsh, Zul'Gurub, Nagrand, Netherstorm, and even Stormwind City (as the elusive Sewer Beast).

Due to the corruption emanating from Grim Batol, some of the crocolisks living in the Wetlands have gained poisonous bites. [3] (NotD 68)

Crocolisks are known to make a hissing noise when they sit still. Though hunters can respec their pet crocolisks into Cunning or Ferocity, they are inherently Tenacity. In addition to the abilities that come standard with all pets ([Growl] and [Avoidance]) and those given to their natural or retrained specialization, all crocolisks are given the following:

Due to the existence of animals like alligators and crocodiles within World of Warcraft, it may be that the crocolisk received its name due to its shockingly similar features shared by basilisks and crocodiles alike. It could also be speculated that perhaps the two species are able to interbreed to create this beast.

Retrieved from "https://wowwiki.fandom.com/wiki/Crocolisk?oldid=2777411"
Community content is available under CC-BY-SA unless otherwise noted.