The cover art for the Warcraft games has had the same Warcraft logo, with subtitles (e.g. Tides of Darkness) have been a popular part of Warcraft culture. The Warcraft I and Warcraft II boxes both had a rivaling Orc and Human on either side.

Starting in Warcraft III there were multiple covers (one for each race.) When you bought directly from blizzard they would send you a random box cover, but the contents were all the same. Most stores however did not have all four. The release of The Frozen Throne only had one box cover however, it hosted Arthas after the events of the human campaign. Currently only the human and orc covers for Reign of Chaos are recognized in that on the battle chest, they use the orc cover, and on the battle.net accounts it is the human.

When the classic World of Warcraft came out, they had a similar way of the cover. They had a Horde and Alliance cover, the Horde one with an Orc in the circle and a Tauren armed with a polearm outside of it. On the Alliance they had a Night Elf in the circle with a Dwarf with a gun on the border. However the more popularly stocked one by far in most retail stores was the Alliance cover, and a Horde manual. In the Battle Chest and the product catalogs, the Night Elf cover is the only one shown. Both the Wrath of the Lich King and The Burning Crusade covers only had one version.

CD cover from Warcraft II: Beyond the Dark Portal 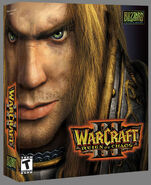 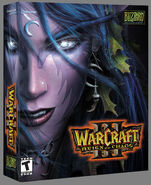 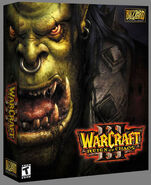 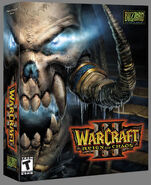 Night Elf and Orc boxes for World of Warcraft

Standard and Collector boxes for World of Warcraft: The Burning Crusade

Box cover for World of Warcraft: Wrath of the Lich King 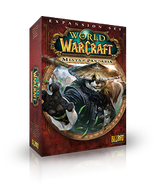 Box cover for World of Warcraft: Mists of Pandaria

Cover art for World of Warcraft: Warlords of Draenor

Box cover for World of Warcraft: Legion
Add a image to this gallery
Retrieved from "https://wowwiki.fandom.com/wiki/Cover_art?oldid=2808865"
Community content is available under CC-BY-SA unless otherwise noted.