Corrupted furbolgs are furbolgs twisted into savage and violent versions of their more peaceful kin through the Burning Legion’s evil influence. They are hunched like their normal kin, standing about 9 feet tall and weighing between 300 and 400 pounds. They have strange markings in their fur and indulge in scarring and piercing to enhance their savage appearance. They are also known to decorate themselves in the remnants of those they have killed. Some corrupted furbolgs display additional demonic characteristics, such as horns, the ability to generate fire, and so on. These are unique individuals who often end up as the leaders of their own war parties. Unlike a standard furbolg, corrupted furbolgs are violent and survive by raiding and looting the communities they come across. They are willing to cooperate with other corrupted creatures to further the Burning Legion’s aims.[1] (MoM 46, 47)

Corrupted furbolgs speak their own language, Ursine, and sometimes the Darnassian tongue.[1] (MoM 46)

Some of the Polar furbolg tribes may also be corrupted by the Scourge.

A group of corrupted Furbolgs attacking a Night elf hunter.

An uncorrupted furbolg fighting a corrupted one 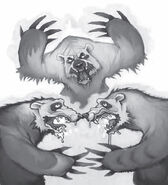 Three corrupted furbolgs[citation needed]
Add a image to this gallery

In the Grizzly Hills, two tribes of Polar furbolg, the Frostpaw and the Redfang tribes have been corrupted by the Old God Yogg-Saron and constantly fight over ownership of Grizzlemaw.

Retrieved from "https://wowwiki.fandom.com/wiki/Corrupted_furbolg?oldid=2288903"
Community content is available under CC-BY-SA unless otherwise noted.