Conjurers (also spelled conjuror) are seers of mystery, holders of secrets, and dwellers in dream. They are practitioners of the arcane arts, having learned through researching the ancient tomes to bend the forces of nature to do their will. They can make the energies of nature strike down opponents, summon forth great creatures or command the elements.[1] (W1ManH 23) Conjurers are capable of summoning scorpions and water elementals as well as casting such potently destructive spells like Rain of Fire and Elemental Blast. Unlike the wizards and mages of the Kirin Tor, who focused on various aspects of the arcane arts, conjurers were primarily concerned with elemental and summoning magics.

Conjurers sometimes become warlocks, highly specialized spellcasters who traffick with demonic entities. Upon becoming a warlock, the conjurer increases its devotion to the conjuration school, yet must forsake study in two other schools.[2]

During the First War, there was an order of Conjurers who served the Kingdom of Stormwind. They were a secretive sect, and would only gather and train in their own specially-prepared mystic towers.[1] (W1ManH 23) The most famous conjurer of the time was Nielas Aran, father of Medivh, the Last Guardian. After the conclusion of the First War, the order was utterly decimated by the Horde, but their legacy lived on with the mages who participated in the Second War.

During the Dark Portal opening event, Gnomeregan Conjurers helped fight back the Demon Horde coming through the Dark Portal. These appear to the same ones that later traveled through the portal to Outland in order to summon a portal back to Azeroth. 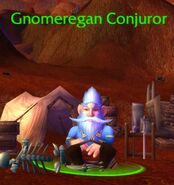 Human Conjuror
Add a image to this gallery

Retrieved from "https://wowwiki.fandom.com/wiki/Conjurer?oldid=2728630"
Community content is available under CC-BY-SA unless otherwise noted.