For the new version of this ability, see Combustion.

Combustion is a mage ability that when activated, gives increasing critical strike chance with Fire spells until 3 criticals occur. Each time a fire spell is cast, the chance to get a critical strike with fire is increased by 10%. This effectively guarantees at least 3 critical strikes from Fire spells within the next 13 casts. This ability is talent trained, requiring 31 points in the fire tree, making it popular with fire mages.

Activating this ability does not invoke the global cooldown, as such it can precede a spell, often with other non-GC abilities such as trinkets, as part of a macro. The cooldown of Combustion does not start until after all charges have been expended.

It is very valuable when intelligently coupled with the Fire talent Hot Streak.

Measuring the value of the talent

Combustion is a means to increase damage, but compared to other damage-boosting abilities (like for example arcane power), the payoff is indirect and its value harder to quantify.

Firstly, combustion is a delayed effect. The first shot sees no benefit at all, and there is no guaranteed benefit until the cumulative crit % reaches 100, forcing a crit on the remaining charges. Combustion's "sweet spot" lies somewhere after the talent has had a chance to build up some, but before its charges are spent. This sweet spot varies according to the underlying stats of the mage. Combustion "peaks" sooner on a high-crit mage than a low-crit mage.

Secondly, the total value of the payoff is variable and depends on the underlying stats of the mage -- and in more ways than one. Consider for example the extreme cases: a hypothetical mage with zero base crit chance would get 3 crits from the talent every time. A hypothetical mage with 100% base crit chance would see no benefit from activating the talent. These edge cases clearly demonstrate the existence of a gradient in the talent's potency. But the gradient is not linear; natural crits not only reduce the value of artificial crits ("I would have crit anyway"), they also waste "charges" on the talent. The more natural crit a mage has, the less total payoff they can expect to see. So a mage with 50% crit gets substantially less than 50% of the maximum benefit.

So what exactly is the value of combustion? How does it compare to other boosters? Say for example a fire mage anticipated the need for burst damage in an upcoming fight, and wanted to maximize the leverage of combustion as a "mini arcane power" by skewing his nominal gear selection to intentionally suppress crit in favor of damage. Obviously there would be a difference, but would the difference be significant or trivial? At what point would the reduction in sustainable baseline dps negate the improved burst coefficient? In order for the mage to find his prefered balance of burst vs sustainable dps, we need some numbers.

The following two graphs were obtained by writing a simple script that mimicks the ruleset of combustion -- namely:

The script was run 50,000 iterations, and recorded the average damage of each cast in the sequence. The test was repeated at various levels of base crit, from 0% to 50%.

The first graph is raw data. The X axis is casts (which can be interpreted as "time"). The Y axis is how much damage this spell did, on average, relative to the same spell cast without the combustion talent. Arcane power is also graphed as a reference curve. For the sake of argument, AP is assumed to last for 5 casts since we're comparing fireballs. It does not account for other ways an arc mage could pack more hits into his boost duration, like pompyro or icy veins. If you want to assume more or fewer hits during AP, simply shift the curve right or left correspondingly. Also keep in mind the graph does not factor in other differences in talents etc. It's intentionally as abstract as possible, rating each talent only in terms of how it modifies the baseline damage of the mage who uses it. 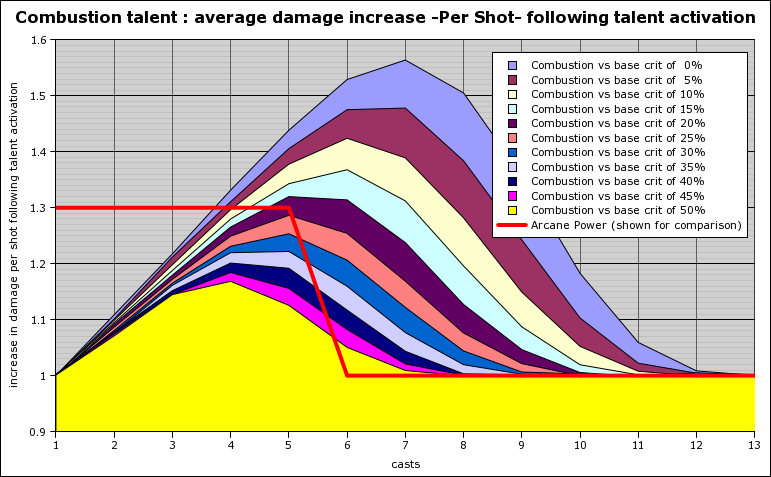 Two things are immediately obvious: as expected, AP is very strong from the start, but also -- perhaps surprisingly -- for mages with low crit there's a brief period where combustion is (on average) an even stronger boost than AP, once it's had a few shots to wind up and accrue a decent crit bonus.

Of course, by this point AP has already been running strong for a while, and already raked in most of its total effect. In order to grade Combustion fairly as a boost, we probably ought to measure the total damage delivered, starting from the first cast (again, measured relative to the damage that would be delivered regardless of the talent). Thus the following graph: 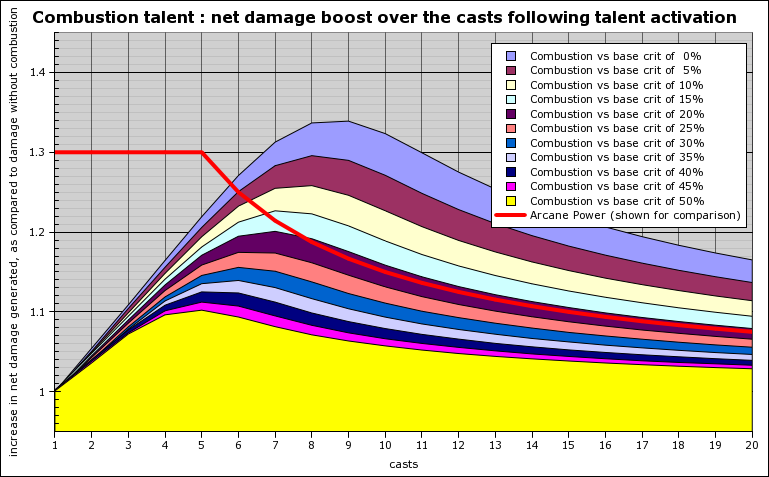 Combustion is nothing compared to AP during the first 15 seconds. However in the time period immediately following, Combustion catches up impressively.

A mage with 20% crit or lower actually gets more total damage increase from Combustion than AP, if the fight lasts long enough for him to catch up. He catches up around cast #8 (24 sec), where the deep purple band overtakes the red line.

A mage with 20% crit can think of Combustion as a 20% boost over 21 seconds casting fireball.

A crit-heavy mage approaching 50% can think of Combustion as a 10% boost over 15 seconds, which still isn't half bad.

Since the horizontal axis is Casts and not Time, the Combustion graph stays the same whether you're casting Fireball or Scorch. But if you wanted to compare against AP using scorch, you'd need to imagine keeping the red line constant while compressing the rest of the graph horizontally by half. The Combustion scorchist will accelerate through the ranks of combustion faster than his fireball cousin, resulting in an earlier peak, but the combustion scorchist will also run out of charges even sooner, reducing the total value-over-time of his Combustion compared to a fixed-duration boost like AP.

Retrieved from "https://wowwiki.fandom.com/wiki/Combustion_(old)?oldid=2627098"
Community content is available under CC-BY-SA unless otherwise noted.