A class is the primary adventuring style of a player character which determines the type of weapons and armor it can use, as well as what abilities, powers, skills, and spells it will gain throughout its adventures.

Be aware that the choice of which class to play is constrained by the choice of race; each race has a different group of available classes to choose from.

Collecting class sets is a way players can improve a character when they have reached the level cap. Most dungeon and raid sets are made up of armor items designed specifically for the class; however, faction rewards sets also include trinkets and neck pieces. When players collect more pieces of the set, they can receive set bonuses.

Always remember that it doesn't matter what class you chose as long as you are willing to stand by it and don't give up. If your class gets nerfed (or made less powerful by Blizzard) always remember that nerfs and buffs are like a pendulum, sooner or later the pendulum is going to swing to your advantage. 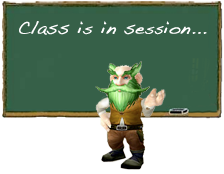 Brief summary of each class

There are currently ten playable classes in-game, but the Death knight hero class is only available to those with at least the

Wrath of the Lich King expansion and a character with a level of 55 or higher.

Druids are versatile hybrids. They perform different roles using appropriate shape-shifting forms. They can have high armor and rage like a warrior in Bear Form, stealth and fight in melee like a rogue in Cat Form, or heal and nuke with spells in humanoid form. Through talents, they can enhance one or more of these roles and even gain a new form for healing (Tree Form) or nuking (Moonkin Form). Their talent trees are Balance, for nuking, Feral, for melee damage, Guardian tanking capabilities, and lastly, Restoration, for healing. With roughly equivalent gear, talents appropriate to the role, and in the hands of a skilled player, they can be just as effective as one of the classes dedicated to each role. They also bring certain additional utility, such as battle resurrection with Rebirth, and emergency or additional healing or tanking, should one of the people filling the primary role die, go offline, or otherwise be unable to fully manage with their role. Certain key differences do still exist, giving them both advantages and disadvantages in any given role.

Hunters are the only class that can effectively use ranged weapons (bows, guns, or crossbows) as a primary source of damage. Very adept at kiting, they have plenty of tools to allow them to avoid melee combat, which is not where their strength lies. Hunters may tame many varieties of beasts to serve as combat pets, which along with an array of scouting, tracking, and survival abilities make them excellent solo characters. The three talent specializations for hunters are Marksmanship, Beast Mastery, and Survival. While all Hunter specializations are considered DPS, they achieve this using slightly different methods: Marksmanship hunters benefit from weapon-based damage bonuses to inflict high burst damage; Beast Mastery hunters have specialized abilities that increase their pet's damage output; Survival hunters have improved traps and shots to keep their enemies at a distance while their DOT's drain HP.

Mages are ranged magic damage dealers with very powerful direct and area of effect damage spells, but in return have weak armor and defense. Mages also feature a variety of utility spells, such as teleportation or the creation of portals to captial cities. The also feature the popular crowd control ability, Polymorph, and can even conjure food and water. Because of their various spells which include burst damage, they are often effective at PvP regardless of their low armor. Their talent specializations include: Fire, which uses many Area of Effect and Burst damage, Frost which offers great survivability and includes a permanent Water Elemental pet that aids in battles, and Arcane, which focuses on dealing high damage to a specific target. Each of their talent trees are sure to provide a unique yet intriguing play style.

Paladins are Holy warriors and are a hybrid class. They can melee DPS, tank, or heal. Paladins also have very strong group support and buff abilities, arguably one of the best buffing and group support classes in the game. They can wear heavy plate armor and carry shields, but are also efficient single target healers, which combine to produce their renowned durability in combat. With talent specialization and equipment selection, Paladins can fill the role of melee DPS, tank, offtank, or healer and excel when called upon to spot-fill all these roles in a group setting. While a Retribution paladin's DPS is slightly less than a pure dps class, they make up for it with their extremely useful utility spells, buffs and auras. Their three talent trees are Holy, Retribution, and Protection.

With the release of the Burning Crusade, paladins are no longer exclusive to the Alliance. Blood Elves (Horde) can now play as paladins.

With the release of Cataclysm Tauren are able to play as paladins. Note that you can be a tauren paladin or any new class-race combo, regardless of which expansion packs you have.

Priests are arguably the most versatile healing class in the game. Priests can be powerful in healing a single character or many allies at once. Priests have a variety of utility spells, along with a few tricks, such as Mind Control and the extremely useful Dispel Magic and Cure Disease. Priests are also known for their shields as they can be used to prevent damage to both the priest and allies, providing a very efficient yet different healing experience. Furthermore, Priests can also specialize in offensive shadow magic, gaining the ability to assume Shadowform, and at higher levels regenerating mana quickly for their entire party.

Rogues excel at dealing melee damage and incapacitating their foes, particularly low health and low armor targets such as casters. Stealth gives them a tactical advantage and allows them to start a fight on their own terms. Other important abilities include lockpicking and the handling of poisons. Also, a huge power is the rogue's ability to stun and incapacitate for a large period of time. This, paired with the rogue's high damage, gives him a huge edge over his opponent. Rogues do not use mana for their combat abilities. Instead they use energy and generate combo points which are used to execute finishing moves.

Shamans are one of the most versatile classes in the game as they can switch seamlessly from offensive caster to healer to melee DPS as needed, though at later levels they often specialize in one of these roles. Shamans can provide good support to a party, with the ability to step in and fill any role that may be lacking at the moment. Their high burst damage and healing also make them quite good at PvP. They are able to drop stationary totems on the ground which provide a variety of effects, many of which are useful to the entire raid. They are unique in that they can provide complete wipe recovery by self-resurrecting and then resurrecting the rest of the party.

With the release of the Burning Crusade, shamans are no longer exclusive to the Horde. Draenei (Alliance) can now play as shaman.

With the release of Cataclysm Dwarves are able to play as shamans. Note that you can be a dwarf shaman or any new class-race combo, regardless of which expansion packs you have.

Warlocks enslave demons and call upon dark magic and curses to dominate and destroy their foes. Like hunters, warlocks employ combat pets, but these are summoned demons rather than tamed beasts. They are primarily ranged magic damage dealers with a focus on damage over time in addition to nukes and AoE, but lack the extreme burst damage capabilities of a mage. Demon pets and fear spells give them a variety of tactical options, and they have several utility spells and abilities, including summoning party members and creating healthstones and soulstones.

Warriors are close-combat fighters and usually fill the role of primary tank or offtank, as they are able to both withstand and inflict fierce physical punishment and have the most versatile means of generating threat and keeping aggro off other characters. They can also contribute very strong melee DPS when needed. Warrior abilities use rage, which is generated by dealing and taking damage, but decays over time while not in combat. Warriors are highly dependent on their gear, as their ability to deal and take damage is controlled directly by the quality and effects of their weapons and armor.

Monks are a new hybrid class. They perform melee DPS, tanking, and healing roles. Their talent trees are Windwalker for melee damage, Brewmaster for tanking capabilities, and lastly, Mistweaver for healing. They use pole arms, staves, one-handed weapons, and fist weapons. They will use cloth and leather for armor with agility and intellect as stat bonuses. They're also the newest class that uses the chi system, which, like death knights and warriors, build up chi (runes for DKs and rage for warriors), and pull off finishers (like rogues) with their weapons.
Unlike originally planned, the Monk will have an Auto-attack.[1]

The death knight combines martial prowess with dark, necromantic energies. It is the first hero class in World of Warcraft. Having a non-hero-class character at level 55 or above is (the only) prerequisite to be able to create a death knight. Death knights start at level 55 in a new starting area in the Eastern Plaguelands with multiple spells and abilities ready to use.
They are a hybrid class, able to tank and/or deal damage. They are a melee class with casting abilities like the paladin, and can raise undead minions. Although they will have minions, they will not be a pet class (unless they have appropriate talent), but will use some of their mechanics. They are the only class to use the rune resource system. It is also notable that death knights have their own talent trees comparable to current classes.

Base starting stats can be found on the race page.

The raid UI, addons and many other resources use the class colors in order to differentiate each class at a glance.

Retrieved from "https://wowwiki.fandom.com/wiki/Class?oldid=2838099"
Community content is available under CC-BY-SA unless otherwise noted.