Chieftain of the Twilight's Hammer Clan, Initiate of the Fifth Circle of the Shadow Council

Cho'gall, Initiate of the Fifth Circle of the Shadow Council and Chieftain of the Twilight's Hammer clan, is a two-headed ogre and the first of the ogre magi. He was an apprentice of Gul'dan. Cho'gall, as with a number of ogres of his type, actually has two names, one for each head — Cho and Gall.[2]

Cho'gall is a two-headed ogre - alongside Blackheart, one of the first seen in many generations - and was trained in the arts of the arcane by the warlock Gul'dan, who aided the struggling ogre in mastering the powers of the Twisting Nether. In time, Cho'gall became one of the most feared and venerated members of the Old Horde during the First and Second Wars against the humans.

Cho'gall became the Chieftain of an orc clan after the previous one was executed for disobeying the Shadow Council. Cho'gall renamed the clan as the Twilight's Hammer, while all records of the both the clan's old name and the chieftain's one were destroyed.[3]

Though Cho'gall was extremely powerful, he was also dangerously insane. The clan, less of a tribe and more of a religious cult, was devoted to bringing about the apocalypse. In his capacity as a chieftain and as the right hand of Gul'dan, Cho'gall aided his master in the creation of the death knights and the Altars of Storms, and in the transformation of normal ogres into ogre magi.

Cho'gall and the Twilight's Hammer followed Gul'dan and the Stormreaver Clan when the warlock went to discover the Tomb of Sargeras. Though he did not enter the tomb himself, Cho'gall was assaulted while defending Gul'dan from the Black Tooth Grin led by Rend and Maim, the sons of Blackhand, who had been sent by Orgrim Doomhammer to destroy the traitor clans that had abandoned the war on the Alliance just before the final push on Capital City. While many perished on the Broken Isles, some members of the Twilight's Hammer clan were able to survive, including Cho'gall, who had long been presumed dead at the hands of the sons of Blackhand and their Black Tooth Grin clan.[4]. After the battle at the Broken Isles, Cho'gall escaped to southern Kalimdor, where he took shelter within the chamber of C'Thun deep inside the Temple of Ahn'Qiraj.

While the Lich King attacked Stormwind City and Orgrimmar and King Varian Wrynn and Warchief Thrall were distracted, Cho'gall began the resurrection of his new master - the Old God C'Thun. This deformed the ogre's body which became monstrous and with features similar to his master's. 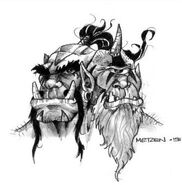 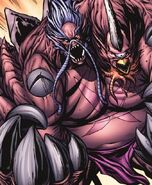 Cho'gall completely twisted by C'thun.
Add a image to this gallery

Retrieved from "https://wowwiki.fandom.com/wiki/Cho%27gall?oldid=2138200"
Community content is available under CC-BY-SA unless otherwise noted.