First of the Ogre-Magi, leader of the Twilight's Hammer clan

Chieftain of the Twilight's Hammer Clan, formerly Initiate of the Fifth Circle of the Shadow Council

Cho'gall, Initiate of the Fifth Circle of the Shadow Council and Chieftain of the Twilight's Hammer clan, is a two-headed ogre and the first of the ogre magi. He was an apprentice of Gul'dan. Cho'gall, as with a number of ogres of his type, actually has two names, one for each head — Cho and Gall.[2]

Cho'gall is a two-headed ogre - alongside Blackheart, one of the first seen in many generations - and was trained in the arts of the arcane by the warlock Gul'dan, who aided the struggling ogre in mastering the powers of the Twisting Nether. In time, Cho'gall became one of the most feared and venerated members of the Old Horde during the First and Second Wars against the humans.

Cho'gall became the Chieftain of an orc clan after the previous one was executed for disobeying the Shadow Council. Cho'gall renamed the clan as the Twilight's Hammer, while all records of both the clan's old name and the chieftain's one were destroyed.[3]

Though Cho'gall was extremely powerful, he was also dangerously insane. The clan, less of a tribe and more of a religious cult, was devoted to bringing about the apocalypse. In his capacity as a chieftain and as the right hand of Gul'dan, Cho'gall aided his master in the creation of the death knights and the Altars of Storms, and in the transformation of normal ogres into ogre magi.

Cho'gall and the Twilight's Hammer followed Gul'dan and the Stormreaver Clan when the warlock went to discover the Tomb of Sargeras. Though he did not enter the tomb himself, Cho'gall was assaulted while defending Gul'dan from the Black Tooth Grin led by Rend and Maim, the sons of Blackhand, who had been sent by Orgrim Doomhammer to destroy the traitor clans that had abandoned the war on the Alliance just before the final push on Capital City. While many perished on the Broken Isles, some members of the Twilight's Hammer clan were able to survive, including Cho'gall, who had long been presumed dead at the hands of the sons of Blackhand and their Black Tooth Grin clan.[4].

After the battle at the Broken Isles, Cho'gall escaped to southern Kalimdor, where he took shelter within the chamber of C'Thun deep inside the Temple of Ahn'Qiraj.

While the Alliance and Horde were focused on defeating the Lich King, Cho'gall hung Med'an on the corpse of the Old God C'Thun, where he would be tormented by the Old God's mad whisperings, and began making preparations for its resurrection, monstrously deforming the ogre's body in the process. Making their way further into the ruined temple, Valeera Sanguinar and Meryl Winterstorm confronted the increasingly hideous Cho'gall, mutated by the power of the Old God. Together they managed to recover Med'an, but in order to fend off Cho'gall and give them enough time to make their escape, Valeera was forced to willingly give her body to the dreadlord Kathra'Natir before the trio were able to teleport to safety.

Later Med'an and his allies battled with Cho'gall, who revealed to him that his plan was to sacrifice Med'an and use his potent magical power to resurrect C'Thun. Cho'gall began performing the rites and channeled a great deal of energy, but Med'an was able to contain it within a ward around the ogre. Restoring Atiesh, Greatstaff of the Guardian to its rightful state, Med'an focused the powers of the council through it to defeat Cho'gall, burying him beneath the rubble of Ahn'Qiraj.

Despite being believed dead, Cho'gall survived his encounter with Med'an though it is unknown how.[5]

Sometime before Deathwing's return to Azeroth, Cho'gall, using spies, managed to set up camps and bases to inspire more people in Orgrimmar and Stormwind to betray their homes and join the Cultists. Adventurers learn that Cho'gall is leading the cult by seeing an image of him.

In Dire Maul, He gave Gordunni Ogre power as a reward for his loyalty and work for the Twilight's Hammer clan. Despite his attempts though, Cho'gall was pushed out of Dire Maul by adventurers of the Horde and Alliance.

After his retreat, Cho'gall and the Twilight's Hammer took over much of the Twilight Highlands. Leading the clan, Cho'gall also had its members attack various people including King Varian Wrynn to buy time for the clan. He also apparently leads bands of gronn and ogres under him.

Cho'gall appears in the Bastion of Twilight as the final boss of the Normal mode. However, on heroic, he is the second to last as the true final boss is Sintharia, who has been revived by Deathwing and Cho'gall.

This section concerns content exclusive to Heroes of the Storm.Cho'gall was officially revealed during BlizzCon 2015 as the first Duo-Player hero of the game and potentially the genre.

When the child of the three realms becomes as light, the ancient power will be released. The earth will tremble. The seas will rise up in answer, and all will be madness. A new day will dawn, bringing with it chaos or peace. Our master is a god of chaos! Pandemonium will aid the old one's release! To this end, we will weaken the barrier between Azeroth and the Elemental Plane. This will allow our great master to reclaim its former elemental servants and send them to rampage throughout our world. 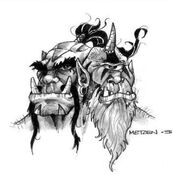 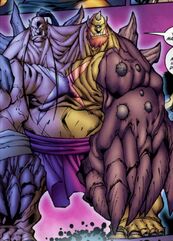 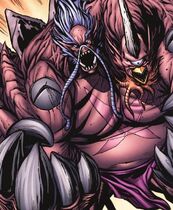 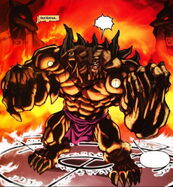 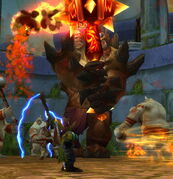 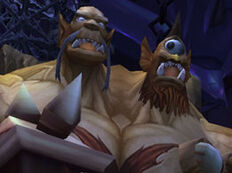 Cho'gall in Bastion of Twilight 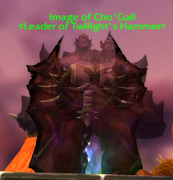 The image of Cho'gall outside of Orgrimmar during the Cataclysm prologue event "Elemental Invasions". 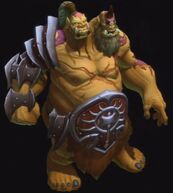 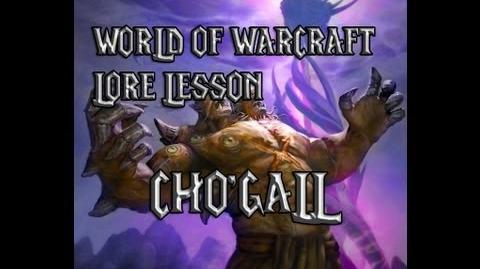 YouTube Vagrant Corps, "The Abyss Will Gaze Back Into You" achievement - 1080p

Retrieved from "https://wowwiki.fandom.com/wiki/Cho%27gall?oldid=2859138"
Community content is available under CC-BY-SA unless otherwise noted.