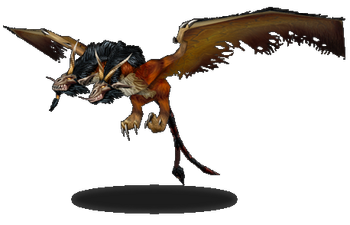 There are four types of creatures called chimaera in the Warcraft universe. It is a large, two-headed flying creature resembling a mix between a dragon and a wyvern.

The mysterious chimaera are deadly, territorial beasts who have developed an empathic bond with the night elf race. These fearsome, two-headed creatures fly above the dark forests of Kalimdor, spewing forth their terrible corrosive breath upon all who would defy the sanctity of the ancient woodlands. Just the sight of these dark, massive beasts is enough to drive most enemies to retreat.[1] (W3Man 122) Chimaera are typically strong allies of the night elves, protecting the forests and the great tree Nordrassil from danger. They are highly reclusive, sentient creatures, but do not possess the ability to speak. They strive foremost to protect the balance of nature. Chimaera hate seeing any natural races or creatures being harmed or oppressed. Those who victimize such creatures under the chimaera’s protection will quickly find a chimaera’s wrath to be very formidable.[2] (MoM 25)

Most chimaera are found in the Stonetalon Mountains, Azshara, and Winterspring, but some larger specimens known as Chimaerok inhabit an island off the coast of Feralas.

Chimaera are skinned in order to obtain Chimera Leather which is used in several Tribal Leatherworking patterns.

Chimaeras are effective for hit-and-run skirmishes against enemy buildings and expansions.

Chimaeras are powerless against other air units. Once the enemy begins using air units against the chimaera you will need some hippogryphs or archers to protect them.

Another type of chimaera (presumably unrelated to the Azerothian variety) can be found in Outland. They have smooth, vibrant skin and alien, bony features. Wherever they are found, they are typically considered a pest.

The image on the right, shown during one of Blizzard's panels, depicts (presumably) the pre-Burning Legion invasion, uncorrupted version of the Outland variety.

A chimaera mount has been added with the release of Warlords of Draenor and the Rylak creatures found throughout Draenor could be a sub-species or sister-species of chimera.

Note: Chimaeras are considered an exotic beast, so can only be trained by hunters with the beast mastery specialization and [Exotic Beasts].

Though hunters can respec their pet chimaeras into Ferocity or Tenacity, they are inherently Cunning. In addition to the abilities that come standard with all pets ([Growl] and [Avoidance]) and those given to their natural or retrained specialization, all chimaeras are given the following:

Mobs with levels listed can be tamed by hunters.

In Greek mythology, the Chimera is a monstrous creature which was made of the parts of multiple animals. The Chimera's appearance is a source of debate, as descriptions merely claim it to be part goat, part serpent, and part lion. The most traditional representations have painted the Chimera as a lion with a snake for a tail and a goat's head sprouting from its back, though other interpretations can be found. All the heads could apparently breathe flame. There was only one Chimera in Greek Mythology, where it is the nemesis of the hero Bellerophon. The hero (like almost all of them, a son of Zeus) exploited the Chimera's one weakness- its inability to fly- and killed it from the back of the winged horse, Pegasus.

The word "chimera" today usually refers to something not quite natural that blends the features of several different animals. The two-headed, draconic creatures who have allied themselves with the night elves fit more closely with this definition, as there is no clear example of the mythological biology, and the original Chimera couldn't fly.

Retrieved from "https://wowwiki.fandom.com/wiki/Chimaera?oldid=2751454"
Community content is available under CC-BY-SA unless otherwise noted.