Chen Stormstout, a jovial and independent Brewmaster of Pandaria, like many other Pandaren Brewmasters, left his hidden empire to journey the lands, searching for exotic ingredients for his ever-evolving concoctions.

He is voiced by Keone Young.

Chen Stormstout was born and raised on the Wandering Isle, a massive landmass on the back of the Giant turtle named Shen-zin Su. He was unable to visit his ancestral homeland of Pandaria, the lost continent that was shrouded in mists. While growing up on the isle, Chen developed his superior fighting skills and the desire to explore and discover new lands like the traveling pandaren who left Pandaria thousands of years ago. It is revealed that Chen often visited the Wood of Staves to get his inspiration.

During his days training as a fighter, Chen was close friends with Strongbo. The two both knew that some day they would challenge each other to decide who would be the master of the Wandering Isle's martial arts school, taking the position of "Geomaster". However, Chen would sometimes grow a sense of wanderlust and often laze about daydreaming. Bo attempted to tell him that all they would need was at their home. Then, they had an argument, and on the day of their challenge Chen did not appear - he had left the island, leaving behind his friends and family. His brother, Chon Po, also feels abandoned, as leaving the island caused Chen to miss his brother's wedding, as well as other important events.

Chen's journeys eventually brought him to the land of Durotar, and his latest brew had a plethora of strange ingredients that he feared would be too hard to acquire. He almost lost hope for his recipe when he was met by Rexxar the travelling Beastmaster. Chen asked Rexxar to retrieve the ingredients for his brew - a barrel of Thunderwater, the egg of a thunder phoenix, and a sprig of thunderbloom.

Chen was overjoyed when Rexxar returned with the ingredients, and then mixed his special brew and offered some to Rexxar, who nearly toppled over from the shock of the volatile beverage! Then Rexxar asked if Chen was trying to kill him, probably in the rhetorical sense but possibly not.

Chen surmised that he would have to further examine the recipe, having completed one phase of his journey, Chen decided to pause his brewing and join Rexxar's adventure, so that he might better appreciate this beautiful, rugged land he had found himself in.[1]

Chen and company went on a secret mission to Theramore Island to help the horde find out why the humans were attacking them. They met with Jaina Proudmoore, who decided to help them out, after seeing what her father had done.[2] Chen helped Rexxar to defend Thrall and Durotar from Kul Tiras incursions. When the Horde was prepared they launched an attack that ended with the death of Grand Admiral Proudmoore.[3]

After the battle Chen spent some time in Durotar teaching the brewmaster ways to the mentor of Brewmaster Drohn before travelling on.[4] No one knows where he left afterwards, but several of his empty kegs have been found scattered throughout the Barrens.[5] Like the rest of his people, he has apparently maintained his independence, joining neither the Horde nor the Alliance.

[Chen's Empty Kegs] scattered around the Barrens. Finding one of these kegs can start a player on the short

Brewmaster Drohn who also gives a few bits of lore. He will also send the player a letter containing the Pandaren Monk if they purchased it.

I would like to introduce you to a long-time friend of mine: you will find this kindly pandaren monk is a most wonderful traveling companion.

May he lead you to new adventures across the face of Azeroth and beyond!

When Chen arrived to Pandaria, he discovered that the Temple of the Jade Serpent was under attack by a battalion of Saurok. Chen, alongside his niece Li Li, arrived to the temple and helped the local pandaren by driving back the Saurok, defeating their leader and returning stolen jade. After the remaining Saurok made a retreat, Chen would trade stories, win a drinking contest, and a brawl outside the Drunken Hozen at Dawn's Blossom. After these events, Chen and Li Li moved on to the Valley of the Four Winds.

Players first encounter Chen who is involved in the beginning quests of the Valley of the Four Winds, where he is visiting his distant family's brewery, Stormstout Brewery as well as the dungeon encompassing the building. Other than exploring Pandaria, Chen's goal appears to be to reestablish contact with the Pandaria Stormstout branch, having been separated when Shen-zin Su stopped returning to the mainland. As he and Li Li are visiting farms in the valley they met a pandaren called Mudmug, from whom they learned about the Stormstout Brewery. Chen visits the brewery but found Uncle Gao who seems to be jealous of Stormstouts. After having defeated the enemies in the brewery, Chen returned to Li Li and Mudmug and set out to Halfhill, from where the trio and an adventurer created a new ale. After this, Chen declared Mudmug to be his "beer brother" and headed towards the Stormstout Brewery. However, the brewery was filled by alementals and hozen. After clearing the entrance, Chen himself headed into the brewery.

At the very conclusion of the Valley of the Four Winds storyline, the Shado-Pan face the invasion of the Mantid who break through the Serpent's Spine. When all hope seemed lost, it was Chen Stormstout who saved the day. Chen was instrumental in the defense of Stoneplow village. Alongside Mudmug and his niece Li Li, Chen had successfully rallied not only the scattered pandaren population of the Valley of the Four Winds, but also managed to unite, albeit temporarily, a group of Night elf Sentinel Castaways with a cadre of Tauren Sunwalkers to cooperate and work together to defend Stoneplow Village from the Mantid. This marked the first time Alliance and Horde forces had fought together side by side for a common cause since the Battle of Angrathar at the Wrathgate.

While having a drink at the Lazy Turnip, Chen was also asked by adventurers on behalf of Ella to taste her brew. Chen liked it and recommended that Ella could speak with Uncle Gao about joining the Stormstout Brewery. Chen and Li Li are also present during the Wanderer's Festival at Turtle Beach in the Krasarang Wilds after Li Li found its location during one of her adventures.

After hearing that the rest of the Stormstouts on Pandaria had traveled beyond the Serpent's Spine to fight the mantid, Chen went after them. Big Dan Stormstout was found sleeping at the Sunset Brewgarden in the Dread Wastes. Chen then found the body of Evie Stormstout, who was slain by the mantid. Taking her body to a secluded grove by the northern cliffs, Chen arranged a short funeral for the young girl.[6]

Stationed in Binan Village, Chen is seen taking care of Vol'jin, after Garrosh Hellscream betrayed him and orchestrated his death. He would task adventurers in finding needles to help Vol'jin deal with the poison in his body, and afterwards takes the troll to Shado-pan Monastery to recuperate.

Shadows of the Horde

In Heroes of the Storm, Chen is a melee warrior hero whose abilities combine together for extra damage. Instead of mana Chen uses brew to power his abilities: a non-regenerating resource that can be regained by using his trait, Fortifying Brew. His passive also gives him a temporary shield that scales with his level increase.

Like most other heroes Chen has three active abilities. His first is 'Flying Kick' an ability that jumps Chen through a target to the other side and deals damage. His second is 'Keg Smash', an AoE ability that deals damage on impact and slows down the targets. His third ability is 'Breath of Fire' which breathes a cone of flame upon his enemies. If the targets are soaked by 'Keg Smash' they take extra damage over three seconds.

Chen Stormstout is a special Neutral Ally card in the World of Warcraft TCG Fires of Outland set. It is a special card that can be used by both Horde and Alliance players in the game.[7] This mirrors the official lore as it appeared in previous material, in which Chen Stormstout's was a Neutral Hero in Warcraft III: The Frozen Throne, originating from a neutral and Independent race as stated in the Role Playing Game and other published lore. 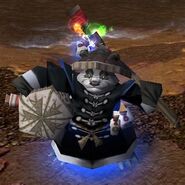 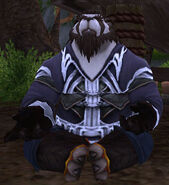 Chen Stormstout meditating at the Valley of the Four Winds. 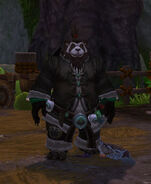 Chen Stormstout in Heroes of the Storm 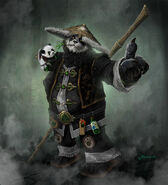 Chen Stormstout In Mega Bloks
Add a image to this gallery 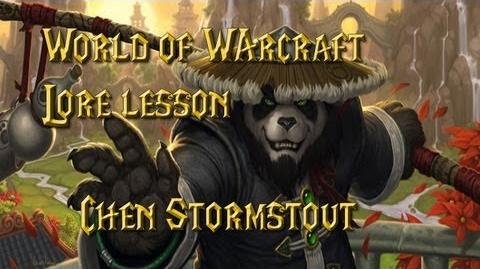 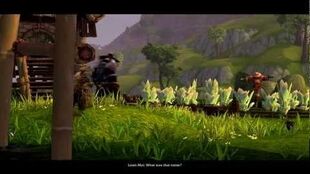 BlizzPlanet Blizzard’s Way to tell a Story: Roleplay as Chen Stormstout in Mists of Pandaria By Medievaldragon – April 14, 2012