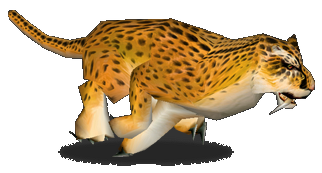 The cheetah is a species of big cat found in The Barrens, the Badlands, and Thousand Needles.

Cheetahs are swift feline predators of the plains. the cheetah is a prolific breeder, with up to nine cubs in a litter. The majority of cubs do not survive to adulthood.

The cheetah's chest is deep and its waist is narrow. The coarse, short fur of the cheetah is tan with round black spots across. There are no spots on its white underside, but the tail has spots. The cheetah has a small head with high-set eyes. Black "tear marks" running from the corner of its eyes down the sides of the nose to its mouth keep sunlight out of its eyes and aid in hunting and seeing long distances.

A cheetah is 3 to 5 feet long and weighs 110 to 130 pounds. Cheetahs make sudden sprints to bring down prey. A cheetah that hits with a claw or bite attack can attempt to trip the opponent. If the attempt fails, the opponent cannot react to trip the cheetah. At times, a cheetah can move ten times its normal speed when it makes a charge.[1] (MGWS 7)

Druids can shapeshift into Travel Form, which looks exactly like a cheetah. So far, although these mobs look like a cheetah, none of them are named as such.

Retrieved from "https://wowwiki.fandom.com/wiki/Cheetah?oldid=2751883"
Community content is available under CC-BY-SA unless otherwise noted.