Start a Wiki
Nestled in the hills between Nagrand and Zangarmarsh, Challe's Home For Little Tykes[50, 14] is a haven for children of both factions.

Challe herself (a troll female) stands next to the hut, watching over the babies inside. Two tykes, Sa'rah (a blood elf girl) and Chaddo (a human boy) run around the place, while a third named Jara (an orc boy) hides in a corner of the sandbox.

There's a dog house just outside the fence with either food or the remains of the dog inside, as the meat is swarmed by flies and there is no dog to be found.

Behind the hut are three cages of varying sizes and types. In one is the remains of a small humanoid.

The cages behind Challe's Home. 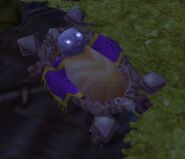 A night elf baby
Add a image to this gallery

Before Patch 2.1.0, this place was deserted, save for the cute baby tauren in the merry-go-round, and the infants in cradles in the hut.

It was believed that Challe's Home may be used for the Outland quests during Children's Week, however that turned to be false with patch 2.1. Currently it seems Blizzard have no plans to do anything here, so we can only assume it is an easter egg.

The patch 2.1 also added babies to the Orphanage in Shattrath including gnome, dwarf and human babies which cannot be seen at Challe's.

How to find it

Challe's is located right on the edge between Nagrand and Zangarmarsh. To find it without coordinates, go to where the last "g" in "Laughing Skull Ruins" is on the map.

It is also speculated, considering the cages behind her hut are filled with "Little Tyke" sized bones and the orphanage is located in such a remote location, that Challe eats the children. The wagon full of explosives is further evidence that she does not care much for the safety of the children.

This theory has more evidence on draenor, as part of the quest 'Guise of the Deceiver' you have to speak to and kill and female orc named 'Challe' and during the fight with her she transforms into a female troll in a red dress like the outland 'Challe'. Also she says that she drained the life of the keeper of elements's wife which suggests that the outland Challe did eat/drain the life of the children. 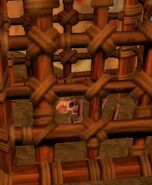 Child? Or someone that wasn't quiet and woke the babies?

An overview of the inside of the hut with 2 sleeping tauren babies, 2 troll babies, and an orc and night elf baby

Here is a collection of other things in the orphanage sandbox

Sandbox as a Whole

Toys in the sand-box

Doghouse with the male human and female blood elf child playing tag
Add a image to this gallery
Retrieved from "https://wowwiki.fandom.com/wiki/Challe%27s_Home_For_Little_Tykes?oldid=2757232"
Community content is available under CC-BY-SA unless otherwise noted.