Were you looking for the version as a boss in the

Heart of the Land

Demigod, Keeper of the Grove, Druid, Druid of the Wild

Forests of Kalimdor and Cenarion Circle

Slain by Grom Hellscream; spirit lives on in the Emerald Dream,

Cenarius is the Lord of the Forest and patron god of all druids except for Zandalari and Kul-tiran druids (along with Elune and Ysera, his mothers, for the night elf druids). He is one of the most powerful and influential demigods of Azeroth.

Cenarius has close ties to the Emerald Dream and its inhabitants including the Wild gods. This is due to his father being a Wild god and his adopted mother Ysera being the guardian of the Emerald Dream. He is not himself titled as a Wild god, though he is obviously part one. He is a demigod, which as such, is more than a wild god, being the child of also Elune.

He is voiced by Tom Wyner in Warcraft III: Reign of Chaos and Neil Kaplan in World of Warcraft: Cataclysm.

The giant creature’s body resembles a cross between the lower portion of an elk and the upper torso of male night elf. Standing perfectly motionless on four heavily muscled legs, the creature exudes an air of serene confidence. Its body glows with a soothing green light that strangely contrasts with the stern look on its face.[2] (S&L 78)

The tauren myth "The White Stag and the Moon" tells of the birth of Cenarius from the union of the moon named Mu'sha and the white stag named Apa'ro.[1] [2] Ysera taught Cenarius the secrets of the Emerald Dream and the natural world.

Elune birthed Cenarius, but gave him up to Malorne because Cenarius was more a creature of the mortal world and could not be with her. Malorne, who had relations with both Elune and Ysera, knew that he could not properly care for his son, but Ysera's love was so great for Malorne that she took Cenarius as her own. Hence being his mother (or adoptive mother).

— As written by Richard A. Knaak seen here hosted by the owner of

The demigod grew into a powerful and cunning being, the union of the heavens and the earth. He has many powers over nature, which he inherited from his father Malorne. He fathered many children. His daughters are known as the fey dryads including Lunara and his sons as the wise Keepers of the Grove, or simply "keepers", including Keeper Remulos, Ordanus, and Zaetar.

According to a night elf legend mentioned in the titles "Warcraft III manual", Manual of Monsters, and Horde Player's Guide, centaur were Cenarius' bastard children. According to legend, he fathered at least one centaur called simply "the centaur" (who in turn was the father of centaur clans himself).[3] (HPG 209) This means he directly fathered some of the centaur clans. This could include some of the clans living in the Eastern Kingdoms, the Marauders, the Stonetalon tribe, and the Krenka tribe of the Barrens. These centaur tribes have nothing to do with the five tribes Zaetar fathered in Kalimdor. Some believe that Cenarius was the sire of the centaur in the Barrens.[1] (WRPG 154)

Night elves are sometimes referred to as "Cenarius' favored children", because of their connection to dryads and keepers, which are described as having the upper body of night elves.[citation needed]

Cenarius claims kinship with the night elves as well, but has never said in what way.[4] (WoE 47)

Tauren believe that Cenarius' earliest known association with mortal races was with the tauren, to whom he first taught the ways of druidism. For countless ages, before the dawn of recorded history, they aided him in protecting the balance of the natural world.

Nethaera suggests that, while Taurens believe that they were the first to discover druidism, this is the belief of Tauren mythology and is currently held by most Tauren as being untrue. This belief does explain the opposing viewpoints of Tauren and Night elf druids.

The War of the Ancients and the Long Vigil

When Archimonde began his first invasion of the world of Azeroth, Malfurion Stormrage and the priestess Tyrande Whisperwind called upon Cenarius for aid. Realizing the cataclysmic nature of the threat the Burning Legion posed, Cenarius amassed an army of woodland allies. They battled Azshara and her followers and the Legion's diabolical agents, finally destroying the Well of Eternity in a cataclysmic explosion that sundered the world.

After Illidan recreated the Well of Eternity on Hyjal Cenarius aided Malfurion in imprisoning the rogue night elf beneath the earth.

Cenarius taught the night elves the ways of the forest, and druidism became widespread among the males. The elves became allied with many of Cenarius' faithful creatures, perhaps most notably the feral hippogryphs who then allowed themselves to be ridden by the night elf archers. Following the druids' entrance into the Emerald Dream Cenarius helped Tyrande and the Sentinels during the Long Vigil. He and his children, the Keepers of the Grove and their dryad sisters, helped to patrol the woodlands from the Moonglade.

The Return of the Legion

Following the arrival of the orcs on Kalimdor, Grom Hellscream was sent to harvest lumber in Ashenvale. This caught the attention of the Sentinels who then immediately attacked the orcs. After Grom held them off, Cenarius himself was brought to the forefront.

Mannoroth, hoping to use the orcs one last time, spilled his blood into a Fountain of Life, corrupting it utterly. Grom was brought to the fountain, where he convinced his clan to drink the demonic blood with him, despite objections that doing so would go against everything Thrall had taught them. After imbibing, the Warsongs were transformed into powerful chaos orcs who could stand up to the might of Cenarius.

In a titanic battle, Cenarius was killed by Hellscream, as Mannoroth had hoped. Mannoroth appeared before Hellscream and his troops moments later and enslaved them, since by drinking his blood they had made themselves susceptible to his control once again.

The death of Cenarius at the hands of the orcs, demon-tainted or not, enraged the night elves, cementing their view of the savage, green-skinned (although red-skinned at that moment) creatures as their enemies. When Malfurion considered the possibility of allying with Jaina's and Thrall's forces, observing that they fought against the undead as well, Tyrande vehemently rejected the idea and cited the fact Cenarius had been killed by them as proof that they were the enemy.

The only clue to Cenarius' current activities comes from a conversation his son Remulos has with the spirit of Malfurion when players complete a particular quest. It appears Cenarius is now helping Malfurion combat The Nightmare that is disrupting the Emerald Dream, causing the corruption of The Four Dragons among other things.

It is believed that he will manifest a new body and return to the world if given enough time to recover.[6] (LoM 15)

This section concerns content exclusive to Cataclysm. Cenarius makes a return with Malfurion Stormrage in World of Warcraft: Cataclysm to fight Ragnaros in Mount Hyjal.[7] While offering quests at the Gates of Sothann, he also appears at the Sanctuary of Malorne[27, 63] during the Firelands Invasion.

Cenarius at the Gates of Sothann

Cenarius, close to the corruption of the Emerald Nightmare, is a boss of that raid in Val'sharah. Upon defeating Cenarius, Malfurion, who aids in the encounter, pauses to begin cleansing his mentor. [8][citation needed] 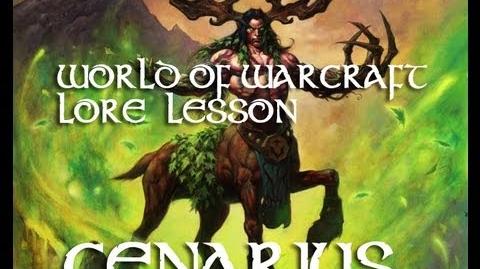 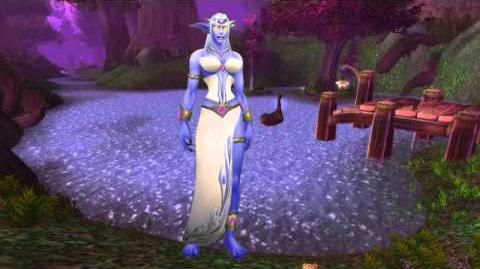 Statistics of Cenarius at Level 10 from Warcraft III

The name Cenarius could have possibly come from the word "Centaurus", Latin for Centaur. This would be quite fitting, given his anatomy and his connection with the Warcraft centaurs.

Alternatively or collectively, Cenarius could also be based upon Cernunnos, a Celtic nature god who was often depicted with antlers, similar to Cenarius. Cernunnos is also worshiped by neo-druids, and was worshiped by ancient druids. "Cernunnos is the god of all wild things and nature, woodlands, fertility, and the hunt."

Retrieved from "https://wowwiki.fandom.com/wiki/Cenarius?oldid=2862599"
Community content is available under CC-BY-SA unless otherwise noted.