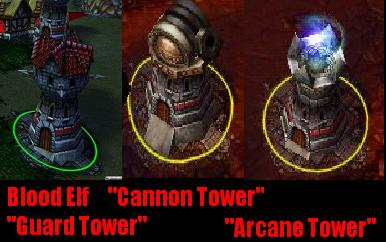 Cannon towers are a type of tower.

Scout towers are tall, sturdy structures constructed to guard the borders of many settlements. From these sites, the defenders of Lordaeron can spot enemy troops from high above, making it difficult for the orcs to launch surprise attacks. Their presence in the wildlands assures the swift deployment of our armies to meet any orc incursion. These towers may be outfitted with deadly bolts that can pierce targets on land, sea, and air. They can also be outfitted with great cannons that, while powerful, cannot attack threats from above turning them into cannon towers.[1] (WC2man 52)

With the study and understanding of gunpowder, scout towers may be modified to house cannons making them cannon towers. The artillery provides increased bombardment of attacking forces, limited only by the restriction of being unable to attack flying invaders. Rows of these sturdy towers provide a formidable defense against even the most aggressive assaults.[2] (W3Man 13)

Retrieved from "https://wowwiki.fandom.com/wiki/Cannon_tower?oldid=1875706"
Community content is available under CC-BY-SA unless otherwise noted.