Brymadaine Zecker was one of the most powerful mages of his generation, or so the stories go. For years, balladeers sang of the ongoing adventures of the great and powerful wizard. Scribes recorded his adventures in tales and song, determined to make the already impressive mage a legend, and they succeeded admirably. It was only when Zecker vanished mysteriously from his room in the Shady Rest Inn, allowing the innkeeper to sort through his belongings in search of clues to his whereabouts, it was discovered that Zecker was not a wizard at all. He was, in fact, a brilliant tinker who for his entire adventuring career had duped the world into believing his inventions were magical artifacts.[1][2] 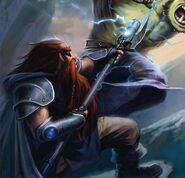 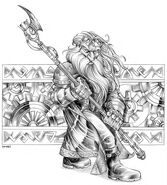 Retrieved from "https://wowwiki.fandom.com/wiki/Brymidaine_Zecker?oldid=2452793"
Community content is available under CC-BY-SA unless otherwise noted.