The Red, The Red Ax

Warrior of the Horde, member of the Kaldorei Resistance (War of the Ancients)

Deceased (slain by Sargeras on Argus)[1]

Broxigar Saurfang (aka Broxigar the Red, Broxigar the Red Ax, or simply Broxigar) was a veteran orc warrior whose comrades were slaughtered in battle and who sought his own death in battle because of his guilt. Broxigar was an important figure in the War of the Ancients, and was chronologically the first orc ever encountered on Azeroth in the new altered timeline.

Broxigar was a veteran of the First, Second, and Third Wars — well-known among his people for his heroic actions in helping to hold a vital mountain pass against hordes of demons during the Third War. Of all of his comrades, Broxigar was the only one left alive when orcish reinforcements finally arrived on the battlefield. Though he was greatly honored by his people, Broxigar never forgave himself for his "cowardice" in surviving while all of his comrades died a noble, glorious death.

When the Horde shamans detected the temporal anomaly in the Stonetalon Mountains, Broxigar and a younger warrior were sent to investigate. Broxigar's companion, Gaskal, was slain and Broxigar himself was thrown ten thousand years into the past along with a human, and a dragon.

Among the night elves Edit

In due course, Broxigar was captured by the Moon Guard and brought to Suramar for safekeeping. Though the night elves treated him like an animal, the priestess Tyrande was kind to him, giving him food and healing his injuries. Broxigar called her "shaman", believing that the powers of healing she used were granted to her by the spirits.

Broxigar was eventually freed by Tyrande who had meanwhile teamed up with two other time-travelers, the dragon-mage Krasus and his former pupil, the human mage Rhonin. Broxigar stood guard over the comatose Malfurion as the latter destroyed a Highborne spell disrupting the Well of Eternity.

Against the Legion Edit

Broxigar's fighting skills earned him a fair reputation among the Kaldorei Resistance. Though typically xenophobic, the night elves accepted him (although the presence of the dragon Korialstrasz may have influenced that somewhat).

When Broxigar's axe was taken by the Moon Guards that captured him, the night elf Malfurion, under the forest demigod Cenarius' direction, created a mystical axe of wood that had the sharpness and density of a diamond. In Broxigar's hands, it was to be the death of literally thousands of demons and allowed him to achieve the unthinkable against their lord.

A Blaze of Glory Edit

At the final battle over the Well of Eternity, Broxigar realized that if the world and the future were to be saved, his companions needed more time. Broxigar leapt from the back of one of the red dragons also carrying Rhonin into the swirling portal that was opening at the bottom of the funnel. When he passed through, and arrived in the realm of the Burning Legion, he proceeded to slaughter multitudes of demons, blocking their advance towards the portal, slaying so many that he ended up standing atop a hill of their bodies — mocking more to come challenge him. It was there that he eventually attracted the attention of Sargeras, who came personally to put an end to the orc's life. However, using the magical axe crafted for him by Malfurion, Broxigar did the impossible, and struck a small wound in Sargeras' leg. This wound would later be the focus of Krasus and his allies' spellwork, that for a second, tore Sargeras' attention away from his struggle to keep the portal open...allowing Malfurion and Illidan to close it upon him. Broxigar's life was ended by Sargeras, right before the demon entered the portal, by the jagged edge of Sargeras's broken sword. With this final act of loyalty, Broxigar the Red sealed his place in history as the only known mortal to have ever staged an assault upon the Burning Legion's leader.

Broxigar the Red died, not a mere honorable death, but was struck down in a blaze of glory nearly unheard of in the history of the orcs.

When Krasus returned to the present day, his first act was to take Broxigar's magical axe directly to Thrall. Disguised as an orc shaman, Krasus told his tale of how Broxigar helped stop another demon invasion, and implored the Warchief to sing songs of Broxigar the Red, his legendary life, and his glorious sacrifice.

The night elves raise up a statue to him, making him the the only orc to have ever been given homage by them.[2]

Now his brother, Varok Saurfang, High Overlord of the Kor'kron Guard holds his name in honor.

Broxigar: (After nearly beheading Varo'then) "Second rule! Only fools talk so much on the battlefield!" 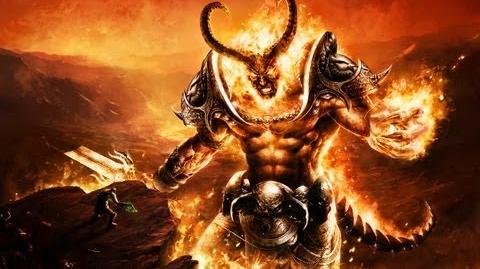 The Story of Broxigar Lore 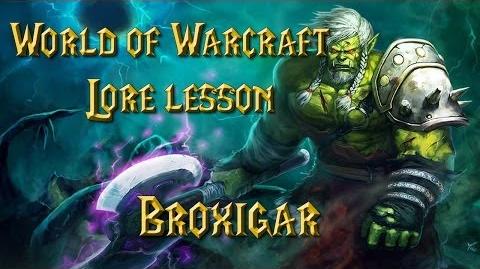 Retrieved from "https://wowwiki.fandom.com/wiki/Broxigar?oldid=2840507"
Community content is available under CC-BY-SA unless otherwise noted.