Brigands in the First WarEdit 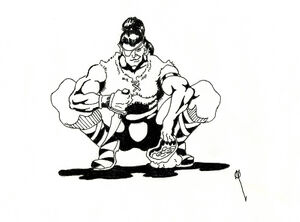 Brigands are evil bandits who were once loyal subjects of the king, but their greed and hatred has turned them against their own people. Like all cowards, they hide in the shadows, waiting to overpower their victims with surprise and numbers. Having been driven out of lawful settlements, they seek refuge wherever they can find it. Often armed with short swords and daggers, they rely upon their speed to fill their purses with ill gotten gains.[1] (W1Man #?)

These are the diabolical humans, whom even their brethren distrust. They use numbers and tactics to overpower much stronger units, and will fight like rabid wolves when cornered. They hide in untraveled lands, and are turned away from any village or encampment where they seek shelter. The short blades they wield are made for quick slashing attacks, and are most effective.[1] (W1Man #?)

Brigands are basically members of a band of thieves, often the "footsoldiers" of the group.

They appear as mobs in World of Warcraft and creeps in Warcraft III.

Interestingly, the brigands help the humans during the one mission they are present, Northshire Abbey.

Retrieved from "https://wowwiki.fandom.com/wiki/Brigand?oldid=2736431"
Community content is available under CC-BY-SA unless otherwise noted.