Blood Elf Bandit is a hostile level 7 blood elf who wanders around Azuremyst Isle. He can be found at about nine different spawn locations on the island, but primarily near Wrathscale Point on the southern coast.

He has been best known to have a 3% - 14% drop chance of the famed [Blood Elf Bandit Mask]; a very sought after piece of headwear both for its looks and the fact that it is the first head piece that low level characters can get their hands on with only a level requirement of five.

He also drops [Blood Elf Communication] for Alliance players only. 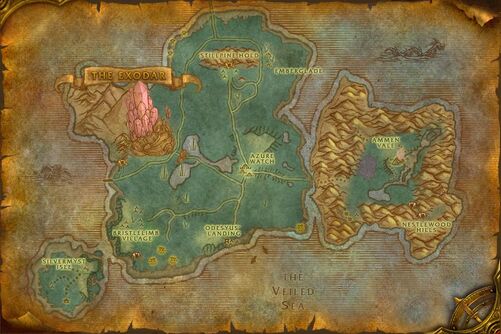 One tactic of finding him is to make a hunter (draenei would be the best because of their starting location), level them up to 24, and use Track Hidden. So that your stealth detection is greatly increased, allowing you to take a detour of the spawn points with the ability to see, and therefore kill the blood elf bandits for their masks. The problem with this tactic, however, is that it takes time to level up a character (even to 24) and the skill Track Hidden may be unnecessary since the bandit is only level 7 and stealth detection passively increases against lower level enemies (though it can help).

Another would be to make a macro with the commands of "/target Blood Elf Bandit" (without the quotes) and spam it whenever you get near a spawn point on the island. Turning off the game's music, can also help because you can hear the sound of their stealthing without as much distraction. This tactic has been said to not work in ways such as; instead of targeting the bandit, it targets you (check your macro if this happens) and keep in mind that for this macro to work, you must be whithin vague proximity of him.(this tactic has later been conformed by me and yes, the macro is dependent upon you being within vague proximity of the bandit. The proximity at which the macro will detect him is increased if he is dead. He seemed to primarily spawn around areas 2, 3, 4, and 6 on the map for me).

You could also get your level 80 friend to help you out because he can practically see them (as stealth detection increases against lower level enemies). Of course getting your level 80 friend is almost always the easiest and most obious answer, and chances are you don't have one.

Once you get the mask, you can mail it to yourself. Since this item does not bind on equip, you could get one of them and mail it back and forth between new and old files, once your older files get better head gear. This item can also be used by any class unlike the Red Defias Mask, a similar vanity mask, that will bind on pickup and has about a 1% chance to drop from mobs in Westfall with only rogues being able to use it.

Retrieved from "https://wowwiki.fandom.com/wiki/Blood_Elf_Bandit?oldid=2723785"
Community content is available under CC-BY-SA unless otherwise noted.