South of the Swamp of Sorrows

The Blasted Lands bears that name for a reason: the area was twisted by the magic that brought the Dark Portal into being, spewing the rampaging Horde out onto Azeroth.

This wasted desert of red clay is home to the original Dark Portal. The portal still stands, and leads to Draenor (used to lead to Outland). Nethergarde Keep, a Stormwind fortress of dour mages and paladins, keeps watch over the portal and the demons and ogres that would abuse its power.[1]

Now, the wretched land hosts few inhabitants and no significant settlements. Magic that leaked through the Dark Portal warped the Blasted Lands, leaving an infertile desert landscape. Hardy desert species like Basilisks, Scorpions and Hyenas have since colonized the area. The red rocks of the region do not come by their color naturally. The original tan color was transmuted into the unearthly crimson by searing heat and chaotic energies when the Dark Portal was destroyed.

There is but one usable road in the Blasted Lands, guarded at the north by Nethergarde Keep’s grim mages. They have the unenviable task of watching the Dark Portal, guarding the rest of the continent from the demons in the south and protecting themselves from the ogre tribes that roam the desert. The weather here is dry and hot during the day and bitterly cold at night. Mountains block any moisture that may come from the Swamp of Sorrows to the north, and no rivers grace this land. The eastern coast will occasionally get storms from the sea, but these downpours come so quickly the water merely runs off the packed earth and back into the sea.

The keepers of Nethergarde have an uptight and uncheerful disposition that seems appropriate in light of the danger they face daily. The warriors and mages fight every day with the ogre magi and demons that threaten either to destroy the keep or take over the Dark Portal. This tightly knit community experiences little crime, however. Those found breaking the agreements they take on when accepting a post at the Keep are sent for a time to the Stockade in Stormwind.

This foul desert was once a dark fen of marshlands called the Black Morass; a sort of sub-region of the Swamp of Sorrows. This is the area where the orcish Horde first entered Azeroth through the Dark Portal, followed soon by their attack on the human lands to the northwest. The lands around the former Dark Portal are burnt and dead, forever warped by the powers that followed its destruction. Lightning strikes are constant, and the inhospitable land is home to groups of especially vicious and powerful creatures. A sizable remnant of the Burning Legion has taken refuge within the Tainted Scar. It is still watched over by the wizards of Dalaran within the Fortress of Nethergarde, established by the Archmage Khadgar after the second war. The unique and dangerous opportunities presented in such a harsh landscape has also attracted the notice of the Blood Elves and the Horde.

As if the Horde weren’t enough, Dreadmaul ogres also came through the Dark Portal. Unlike the orcs, they remained in the Blasted Lands. Nethergarde’s mages tell that the ogres serve Lord Kazzak. Whoever their master is, he orders them to attack the Alliance’s keep on an uncomfortably regular basis.

The Blasted Lands were once littered with gold mines, and heavily populated with centaur.[2]

This desolate and barren land has very little in the way of flora and fauna, barring the demons which now wander the plains. The region is particularly notable because the Dark Portal leading into Outland can be found here.

There are no instanced dungeons or battlegrounds in this zone, though several micro dungeons can be found here.

The Blasted Lands are home to several characters of note. At Nethergarde Keep, Thadius Grimshade aids adventurers in locating a special gryphon. Further west, near Dreadmaul Hold, Bloodmage Drazial and Bloodmage Lynnore attempt to capture the essence of strength, power and wisdom from the local beasts and turn them into special elixirs. And deep inside the Tainted Scar, Daio the Decrepit sends highly seasoned warlocks into the darkest, most demonic parts of the world in search of mystical items.

There are three main quest "chains" in the Blasted Lands: The potions quests, the Kum'isha quests, and the You Are Rakh'likh, Demon quest chain.

These quests are obtained from Kum'Isha The Collector, level 60 in the Middle of Blasted Lands. He has two quests, one that requires you to find a random Green Item called Imperfect Draenethyst Fragment and one that requires you to find a random Blue Item called Flawless Draenethyst Sphere, which is even rarer, and has about 0.2% chance to drop. Any mob in the Blasted Lands can drop both of these items, but the best source for the sphere is Teremus The Devourer, a dragon that can be 5 manned. It drops it 75% chance and usually about 2-3 spheres. Each of these spheres give a Level 40-50 Superior/Rare Item, or if you are very lucky, an Epic Item. The Imperfect Fragments only give random Level 40-50 Uncommon Items.

This is one of the zones Blizzard is most excited about. The level range of the zone is 54+[3], and the newly exposed coastline to the east allows for a brand new play zone.

In addition to these, the Tainted Scar (sub-zone in the south-western parts of the Blasted Lands, currently populated by elite demons) is now a large worgen area. Instead of being a "scar", it is a forest, dark, misty, and gloomy, with exposure to the ocean.[4]

The worgen in the fishing village of Surwich are allied with the Alliance.

Surwich[7]
Add a image to this gallery 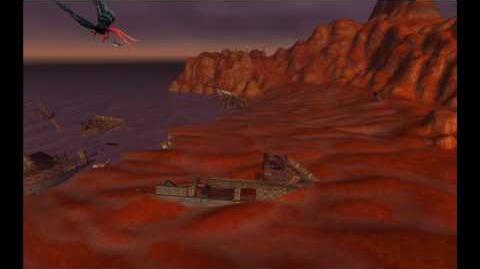 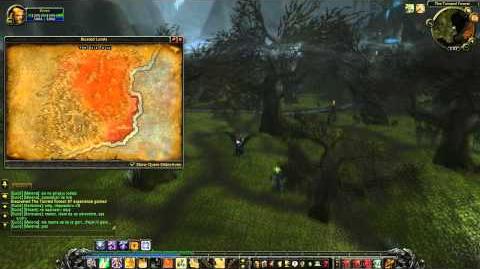 Cataclysm Blasted lands
Add a image to this gallery

These barrens are littered with gold mines and populated by centaurs. The tileset is called "Barrens".[8]

Retrieved from "https://wowwiki.fandom.com/wiki/Blasted_Lands?oldid=2860356"
Community content is available under CC-BY-SA unless otherwise noted.